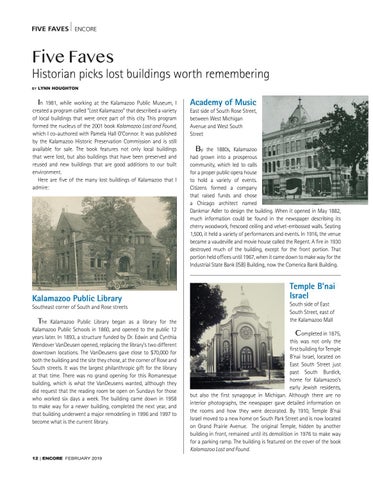 The Kalamazoo Public Library began as a library for the Kalamazoo Public Schools in 1860, and opened to the public 12 years later. In 1893, a structure funded by Dr. Edwin and Cynthia Wendover VanDeusen opened, replacing the library’s two different downtown locations. The VanDeusens gave close to $70,000 for both the building and the site they chose, at the corner of Rose and South streets. It was the largest philanthropic gift for the library at that time. There was no grand opening for this Romanesque building, which is what the VanDeusens wanted, although they did request that the reading room be open on Sundays for those who worked six days a week. The building came down in 1958 to make way for a newer building, completed the next year, and that building underwent a major remodeling in 1996 and 1997 to become what is the current library.

the 1880s, Kalamazoo had grown into a prosperous community, which led to calls for a proper public opera house to hold a variety of events. Citizens formed a company that raised funds and chose a Chicago architect named Dankmar Adler to design the building. When it opened in May 1882, much information could be found in the newspaper describing its cherry woodwork, frescoed ceiling and velvet-embossed walls. Seating 1,500, it held a variety of performances and events. In 1916, the venue became a vaudeville and movie house called the Regent. A fire in 1930 destroyed much of the building, except for the front portion. That portion held offices until 1967, when it came down to make way for the Industrial State Bank (ISB) Building, now the Comerica Bank Building.

Completed in 1875, this was not only the first building for Temple B’nai Israel, located on East South Street just past South Burdick, home for Kalamazoo’s early Jewish residents, but also the first synagogue in Michigan. Although there are no interior photographs, the newspaper gave detailed information on the rooms and how they were decorated. By 1910, Temple B’nai Israel moved to a new home on South Park Street and is now located on Grand Prairie Avenue. The original Temple, hidden by another building in front, remained until its demolition in 1976 to make way for a parking ramp. The building is featured on the cover of the book Kalamazoo Lost and Found.