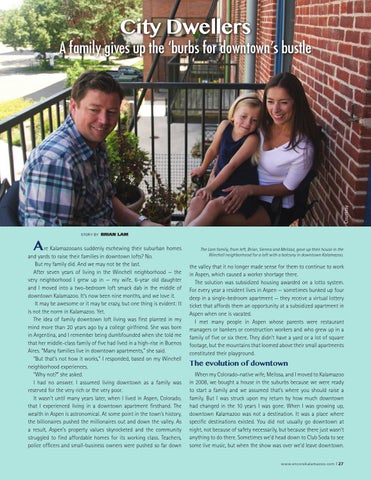 A family gives up the ‘burbs for downtown’s bustle

re Kalamazooans suddenly eschewing their suburban homes and yards to raise their families in downtown lofts? No. But my family did. And we may not be the last. After seven years of living in the Winchell neighborhood — the very neighborhood I grew up in — my wife, 6-year old daughter and I moved into a two-bedroom loft smack dab in the middle of downtown Kalamazoo. It’s now been nine months, and we love it. It may be awesome or it may be crazy, but one thing is evident: It is not the norm in Kalamazoo. Yet. The idea of family downtown loft living was first planted in my mind more than 20 years ago by a college girlfriend. She was born in Argentina, and I remember being dumbfounded when she told me that her middle-class family of five had lived in a high-rise in Buenos Aires. “Many families live in downtown apartments,” she said. “But that’s not how it works,” I responded, based on my Winchell neighborhood experiences. “Why not?” she asked. I had no answer. I assumed living downtown as a family was reserved for the very rich or the very poor. It wasn’t until many years later, when I lived in Aspen, Colorado, that I experienced living in a downtown apartment firsthand. The wealth in Aspen is astronomical. At some point in the town’s history, the billionaires pushed the millionaires out and down the valley. As a result, Aspen’s property values skyrocketed and the community struggled to find affordable homes for its working class. Teachers, police officers and small-business owners were pushed so far down

The Lam family, from left, Brian, Sienna and Melissa, gave up their house in the Winchell neighborhood for a loft with a balcony in downtown Kalamazoo.

the valley that it no longer made sense for them to continue to work in Aspen, which caused a worker shortage there. The solution was subsidized housing awarded on a lotto system. For every year a resident lives in Aspen — sometimes bunked up four deep in a single-bedroom apartment — they receive a virtual lottery ticket that affords them an opportunity at a subsidized apartment in Aspen when one is vacated. I met many people in Aspen whose parents were restaurant managers or bankers or construction workers and who grew up in a family of five or six there. They didn’t have a yard or a lot of square footage, but the mountains that loomed above their small apartments constituted their playground.

The evolution of downtown When my Colorado-native wife, Melissa, and I moved to Kalamazoo in 2008, we bought a house in the suburbs because we were ready to start a family and we assumed that’s where you should raise a family. But I was struck upon my return by how much downtown had changed in the 10 years I was gone. When I was growing up, downtown Kalamazoo was not a destination. It was a place where specific destinations existed. You did not usually go downtown at night, not because of safety necessarily, but because there just wasn’t anything to do there. Sometimes we’d head down to Club Soda to see some live music, but when the show was over we’d leave downtown. w w w.encorekalamazoo.com | 27

Southwest Michigan's Magazine: How Downtown Kalamazoo is becoming the place to be, terrific truffles, the family behind Wahmhoff Christmas trees, 120 Taphouse & Bistro, Tiana Gee and more!