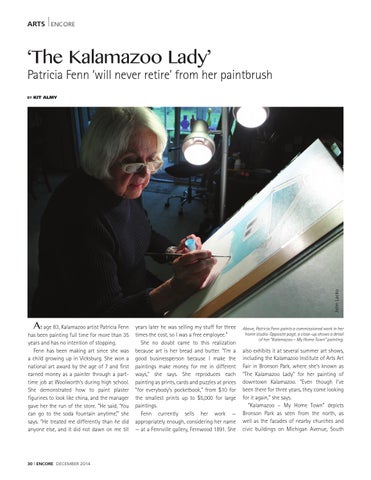 Patricia Fenn ‘will never retire’ from her paintbrush Kit Almy

t age 83, Kalamazoo artist Patricia Fenn has been painting full time for more than 35 years and has no intention of stopping. Fenn has been making art since she was a child growing up in Vicksburg. She won a national art award by the age of 7 and first earned money as a painter through a parttime job at Woolworth’s during high school. She demonstrated how to paint plaster figurines to look like china, and the manager gave her the run of the store. “He said, ‘You can go to the soda fountain anytime,’” she says. “He treated me differently than he did anyone else, and it did not dawn on me till

years later he was selling my stuff for three times the cost, so I was a free employee.” She no doubt came to this realization because art is her bread and butter. “I’m a good businessperson because I make the paintings make money for me in different ways,” she says. She reproduces each painting as prints, cards and puzzles at prices “for everybody’s pocketbook,” from $10 for the smallest prints up to $5,000 for large paintings. Fenn currently sells her work — appropriately enough, considering her name — at a Fennville gallery, Fernwood 1891. She

Above, Patricia Fenn paints a commissioned work in her home studio. Opposite page, a close-up shows a detail of her “Kalamazoo – My Home Town” painting.

also exhibits it at several summer art shows, including the Kalamazoo Institute of Arts Art Fair in Bronson Park, where she’s known as “The Kalamazoo Lady” for her painting of downtown Kalamazoo. “Even though I’ve been there for three years, they come looking for it again,” she says. “Kalamazoo – My Home Town” depicts Bronson Park as seen from the north, as well as the facades of nearby churches and civic buildings on Michigan Avenue, South