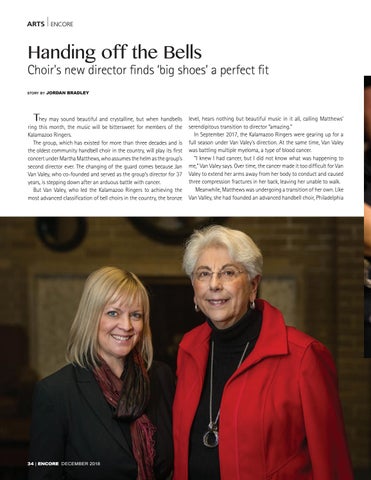 Handing off the Bells

They may sound beautiful and crystalline, but when handbells

ring this month, the music will be bittersweet for members of the Kalamazoo Ringers. The group, which has existed for more than three decades and is the oldest community handbell choir in the country, will play its first concert under Martha Matthews, who assumes the helm as the group’s second director ever. The changing of the guard comes because Jan Van Valey, who co-founded and served as the group’s director for 37 years, is stepping down after an arduous battle with cancer. But Van Valey, who led the Kalamazoo Ringers to achieving the most advanced classification of bell choirs in the country, the bronze

level, hears nothing but beautiful music in it all, calling Matthews’ serendipitous transition to director “amazing.” In September 2017, the Kalamazoo Ringers were gearing up for a full season under Van Valey’s direction. At the same time, Van Valey was battling multiple myeloma, a type of blood cancer. “I knew I had cancer, but I did not know what was happening to me,” Van Valey says. Over time, the cancer made it too difficult for Van Valey to extend her arms away from her body to conduct and caused three compression fractures in her back, leaving her unable to walk. Meanwhile, Matthews was undergoing a transition of her own. Like Van Valley, she had founded an advanced handbell choir, Philadelphia