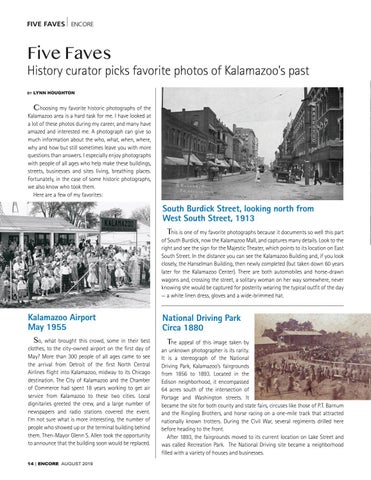 History curator picks favorite photos of Kalamazoo’s past by

Choosing my favorite historic photographs of the Kalamazoo area is a hard task for me. I have looked at a lot of these photos during my career, and many have amazed and interested me. A photograph can give so much information about the who, what, when, where, why and how but still sometimes leave you with more questions than answers. I especially enjoy photographs with people of all ages who help make these buildings, streets, businesses and sites living, breathing places. Fortunately, in the case of some historic photographs, we also know who took them. Here are a few of my favorites:

South Burdick Street, looking north from West South Street, 1913 This is one of my favorite photographs because it documents so well this part of South Burdick, now the Kalamazoo Mall, and captures many details. Look to the right and see the sign for the Majestic Theater, which points to its location on East South Street. In the distance you can see the Kalamazoo Building and, if you look closely, the Hanselman Building, then newly completed (but taken down 60 years later for the Kalamazoo Center). There are both automobiles and horse-drawn wagons and, crossing the street, a solitary woman on her way somewhere, never knowing she would be captured for posterity wearing the typical outfit of the day — a white linen dress, gloves and a wide-brimmed hat.

So, what brought this crowd, some in their best clothes, to the city-owned airport on the first day of May? More than 300 people of all ages came to see the arrival from Detroit of the first North Central Airlines flight into Kalamazoo, midway to its Chicago destination. The City of Kalamazoo and the Chamber of Commerce had spent 18 years working to get air service from Kalamazoo to these two cities. Local dignitaries greeted the crew, and a large number of newspapers and radio stations covered the event. I’m not sure what is more interesting, the number of people who showed up or the terminal building behind them. Then-Mayor Glenn S. Allen took the opportunity to announce that the building soon would be replaced.

The appeal of this image taken by an unknown photographer is its rarity. It is a stereograph of the National Driving Park, Kalamazoo’s fairgrounds from 1856 to 1893. Located in the Edison neighborhood, it encompassed 64 acres south of the intersection of Portage and Washington streets. It became the site for both county and state fairs, circuses like those of P.T. Barnum and the Ringling Brothers, and horse racing on a one-mile track that attracted nationally known trotters. During the Civil War, several regiments drilled here before heading to the front. After 1893, the fairgrounds moved to its current location on Lake Street and was called Recreation Park. The National Driving site became a neighborhood filled with a variety of houses and businesses.