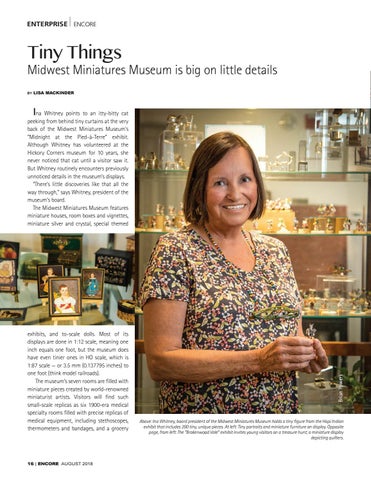 Midwest Miniatures Museum is big on little details by

exhibits, and to-scale dolls. Most of its displays are done in 1:12 scale, meaning one inch equals one foot, but the museum does have even tinier ones in HO scale, which is 1:87 scale — or 3.5 mm (0.137795 inches) to one foot (think model railroads). The museum’s seven rooms are filled with miniature pieces created by world-renowned miniaturist artists. Visitors will find such small-scale replicas as six 1900-era medical specialty rooms filled with precise replicas of medical equipment, including stethoscopes, thermometers and bandages, and a grocery

na Whitney points to an itty-bitty cat peeking from behind tiny curtains at the very back of the Midwest Miniatures Museum’s “Midnight at the Pied-à-Terre” exhibit. Although Whitney has volunteered at the Hickory Corners museum for 10 years, she never noticed that cat until a visitor saw it. But Whitney routinely encounters previously unnoticed details in the museum’s displays. “There’s little discoveries like that all the way through,” says Whitney, president of the museum’s board. The Midwest Miniatures Museum features miniature houses, room boxes and vignettes, miniature silver and crystal, special themed

Above: Ina Whitney, board president of the Midwest Miniatures Museum holds a tiny figure from the Hopi Indian exhibit that includes 200 tiny, unique pieces. At left: Tiny portraits and miniature furniture on display. Opposite page, from left: The “Brakenwood Vale” exhibit invites young visitors on a treasure hunt; a miniature display depicting quilters.