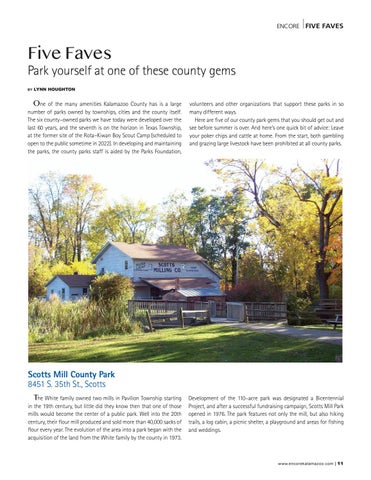 Park yourself at one of these county gems by

One of the many amenities Kalamazoo County has is a large number of parks owned by townships, cities and the county itself. The six county–owned parks we have today were developed over the last 60 years, and the seventh is on the horizon in Texas Township, at the former site of the Rota–Kiwan Boy Scout Camp (scheduled to open to the public sometime in 2022). In developing and maintaining the parks, the county parks staff is aided by the Parks Foundation,

volunteers and other organizations that support these parks in so many different ways. Here are five of our county park gems that you should get out and see before summer is over. And here’s one quick bit of advice: Leave your poker chips and cattle at home. From the start, both gambling and grazing large livestock have been prohibited at all county parks.

Scotts Mill County Park 8451 S. 35th St., Scotts The White family owned two mills in Pavilion Township starting in the 19th century, but little did they know then that one of those mills would become the center of a public park. Well into the 20th century, their flour mill produced and sold more than 40,000 sacks of flour every year. The evolution of the area into a park began with the acquisition of the land from the White family by the county in 1973.

Development of the 110–acre park was designated a Bicentennial Project, and after a successful fundraising campaign, Scotts Mill Park opened in 1976. The park features not only the mill, but also hiking trails, a log cabin, a picnic shelter, a playground and areas for fishing and weddings.