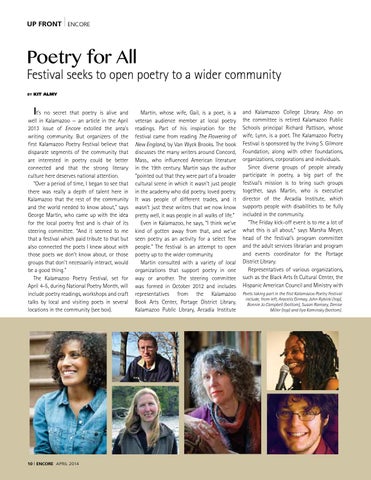 Festival seeks to open poetry to a wider community by

t’s no secret that poetry is alive and well in Kalamazoo — an article in the April 2013 issue of Encore extolled the area’s writing community. But organizers of the first Kalamazoo Poetry Festival believe that disparate segments of the community that are interested in poetry could be better connected and that the strong literary culture here deserves national attention. “Over a period of time, I began to see that there was really a depth of talent here in Kalamazoo that the rest of the community and the world needed to know about,” says George Martin, who came up with the idea for the local poetry fest and is chair of its steering committee. “And it seemed to me that a festival which paid tribute to that but also connected the poets I knew about with those poets we don’t know about, or those groups that don’t necessarily interact, would be a good thing.” The Kalamazoo Poetry Festival, set for April 4-5, during National Poetry Month, will include poetry readings, workshops and craft talks by local and visiting poets in several locations in the community (see box).

Martin, whose wife, Gail, is a poet, is a veteran audience member at local poetry readings. Part of his inspiration for the festival came from reading The Flowering of New England, by Van Wyck Brooks. The book discusses the many writers around Concord, Mass., who influenced American literature in the 19th century. Martin says the author “pointed out that they were part of a broader cultural scene in which it wasn’t just people in the academy who did poetry, loved poetry. It was people of different trades, and it wasn’t just these writers that we now know pretty well, it was people in all walks of life.” Even in Kalamazoo, he says, “I think we’ve kind of gotten away from that, and we’ve seen poetry as an activity for a select few people.” The festival is an attempt to open poetry up to the wider community. Martin consulted with a variety of local organizations that support poetry in one way or another. The steering committee was formed in October 2012 and includes representatives from the Kalamazoo Book Arts Center, Portage District Library, Kalamazoo Public Library, Arcadia Institute

and Kalamazoo College Library. Also on the committee is retired Kalamazoo Public Schools principal Richard Pattison, whose wife, Lynn, is a poet. The Kalamazoo Poetry Festival is sponsored by the Irving S. Gilmore Foundation, along with other foundations, organizations, corporations and individuals. Since diverse groups of people already participate in poetry, a big part of the festival’s mission is to bring such groups together, says Martin, who is executive director of the Arcadia Institute, which supports people with disabilities to be fully included in the community. “The Friday kick-off event is to me a lot of what this is all about,” says Marsha Meyer, head of the festival’s program committee and the adult services librarian and program and events coordinator for the Portage District Library. Representatives of various organizations, such as the Black Arts &amp; Cultural Center, the Hispanic American Council and Ministry with Poets taking part in the first Kalamazoo Poetry Festival include, from left, Aracelis Girmay, John Rybicki (top), Bonnie Jo Campbell (bottom), Susan Ramsey, Denise Miller (top) and Ilya Kaminsky (bottom).

Southwest Michigan's Magazine -- celebrating the great things, people and places of our corner of the Mitten.