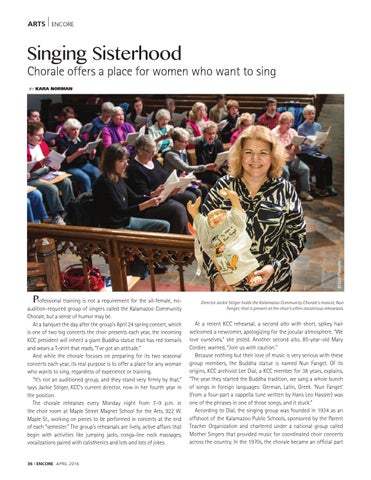 Professional training is not a requirement for the all-female, no-

audition-required group of singers called the Kalamazoo Community Chorale, but a sense of humor may be. At a banquet the day after the group’s April 24 spring concert, which is one of two big concerts the choir presents each year, the incoming KCC president will inherit a giant Buddha statue that has red toenails and wears a T-shirt that reads, “I’ve got an attitude.” And while the chorale focuses on preparing for its two seasonal concerts each year, its real purpose is to offer a place for any woman who wants to sing, regardless of experience or training. “It’s not an auditioned group, and they stand very firmly by that,” says Jackie Stilger, KCC’s current director, now in her fourth year in the position. The chorale rehearses every Monday night from 7–9 p.m. in the choir room at Maple Street Magnet School for the Arts, 922 W. Maple St., working on pieces to be performed in concerts at the end of each “semester.” The group’s rehearsals are lively, active affairs that begin with activities like jumping jacks, conga-line neck massages, vocalizations paired with calisthenics and lots and lots of jokes.

At a recent KCC rehearsal, a second alto with short, spikey hair welcomed a newcomer, apologizing for the jocular atmosphere. “We love ourselves,” she jested. Another second alto, 85-year-old Mary Cordier, warned, “Join us with caution.” Because nothing but their love of music is very serious with these group members, the Buddha statue is named Nun Fanget. Of its origins, KCC archivist Lee Dial, a KCC member for 38 years, explains, “The year they started the Buddha tradition, we sang a whole bunch of songs in foreign languages: German, Latin, Greek. ‘Nun Fanget’ (from a four-part a cappella tune written by Hans Leo Hassler) was one of the phrases in one of those songs, and it stuck.” According to Dial, the singing group was founded in 1934 as an offshoot of the Kalamazoo Public Schools, sponsored by the Parent Teacher Organization and chartered under a national group called Mother Singers that provided music for coordinated choir concerts across the country. In the 1970s, the chorale became an official part