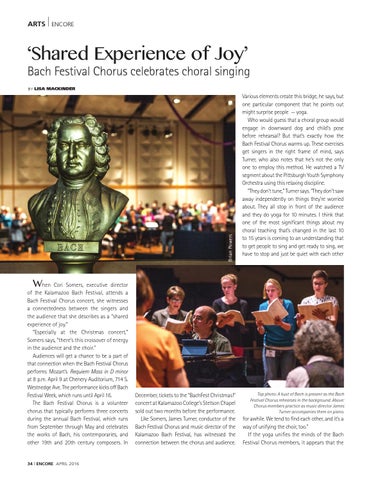 Various elements create this bridge, he says, but one particular component that he points out might surprise people — yoga. Who would guess that a choral group would engage in downward dog and child’s pose before rehearsal? But that’s exactly how the Bach Festival Chorus warms up. These exercises get singers in the right frame of mind, says Turner, who also notes that he’s not the only one to employ this method. He watched a TV segment about the Pittsburgh Youth Symphony Orchestra using this relaxing discipline. “They don’t tune,” Turner says. “They don’t saw away independently on things they’re worried about. They all stop in front of the audience and they do yoga for 10 minutes. I think that one of the most significant things about my choral teaching that’s changed in the last 10 to 15 years is coming to an understanding that to get people to sing and get ready to sing, we have to stop and just be quiet with each other

hen Cori Somers, executive director of the Kalamazoo Bach Festival, attends a Bach Festival Chorus concert, she witnesses a connectedness between the singers and the audience that she describes as a “shared experience of joy.” “Especially at the Christmas concert,” Somers says, “there’s this crossover of energy in the audience and the choir.” Audiences will get a chance to be a part of that connection when the Bach Festival Chorus performs Mozart’s Requiem Mass in D minor at 8 p.m. April 9 at Chenery Auditorium, 714 S. Westnedge Ave. The performance kicks off Bach Festival Week, which runs until April 16. The Bach Festival Chorus is a volunteer chorus that typically performs three concerts during the annual Bach Festival, which runs from September through May and celebrates the works of Bach, his contemporaries, and other 19th and 20th century composers. In

December, tickets to the “BachFest Christmas!” concert at Kalamazoo College’s Stetson Chapel sold out two months before the performance. Like Somers, James Turner, conductor of the Bach Festival Chorus and music director of the Kalamazoo Bach Festival, has witnessed the connection between the chorus and audience.

Top photo: A bust of Bach is present as the Bach Festival Chorus rehearses in the background. Above: Chorus members practice as music director James Turner accompanies them on piano.

for awhile. We tend to find each other, and it’s a way of unifying the choir, too.” If the yoga unifies the minds of the Bach Festival Chorus members, it appears that the