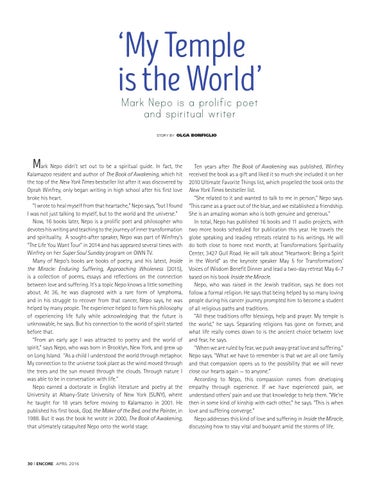 ark Nepo didn’t set out to be a spiritual guide. In fact, the Kalamazoo resident and author of The Book of Awakening, which hit the top of the New York Times bestseller list after it was discovered by Oprah Winfrey, only began writing in high school after his first love broke his heart. “I wrote to heal myself from that heartache,” Nepo says, “but I found I was not just talking to myself, but to the world and the universe.” Now, 16 books later, Nepo is a prolific poet and philosopher who devotes his writing and teaching to the journey of inner transformation and spirituality. A sought-after speaker, Nepo was part of Winfrey's “The Life You Want Tour” in 2014 and has appeared several times with Winfrey on her Super Soul Sunday program on OWN TV. Many of Nepo’s books are books of poetry, and his latest, Inside the Miracle: Enduring Suffering, Approaching Wholeness (2015), is a collection of poems, essays and reflections on the connection between love and suffering. It's a topic Nepo knows a little something about. At 36, he was diagnosed with a rare form of lymphoma, and in his struggle to recover from that cancer, Nepo says, he was helped by many people. The experience helped to form his philosophy of experiencing life fully while acknowledging that the future is unknowable, he says. But his connection to the world of spirit started before that. “From an early age I was attracted to poetry and the world of spirit,” says Nepo, who was born in Brooklyn, New York, and grew up on Long Island. “As a child I understood the world through metaphor. My connection to the universe took place as the wind moved through the trees and the sun moved through the clouds. Through nature I was able to be in conversation with life.” Nepo earned a doctorate in English literature and poetry at the University at Albany-State University of New York (SUNY), where he taught for 18 years before moving to Kalamazoo in 2001. He published his first book, God, the Maker of the Bed, and the Painter, in 1988. But it was the book he wrote in 2000, The Book of Awakening, that ultimately catapulted Nepo onto the world stage.

Writers help each other improve craft and ‘crank it out’

Ten years after The Book of Awakening was published, Winfrey received the book as a gift and liked it so much she included it on her 2010 Ultimate Favorite Things list, which propelled the book onto the New York Times bestseller list. “She related to it and wanted to talk to me in person,” Nepo says. “This came as a grace out of the blue, and we established a friendship. She is an amazing woman who is both genuine and generous.” In total, Nepo has published 16 books and 11 audio projects, with two more books scheduled for publication this year. He travels the globe speaking and leading retreats related to his writings. He will do both close to home next month, at Transformations Spirituality Center, 3427 Gull Road. He will talk about “Heartwork: Being a Spirit in the World” as the keynote speaker May 5 for Transformations’ Voices of Wisdom Benefit Dinner and lead a two-day retreat May 6-7 based on his book Inside the Miracle. Nepo, who was raised in the Jewish tradition, says he does not follow a formal religion. He says that being helped by so many loving people during his cancer journey prompted him to become a student of all religious paths and traditions. “All these traditions offer blessings, help and prayer. My temple is the world,” he says. Separating religions has gone on forever, and what life really comes down to is the ancient choice between love and fear, he says. “When we are ruled by fear, we push away great love and suffering,” Nepo says. “What we have to remember is that we are all one family and that compassion opens us to the possibility that we will never close our hearts again — to anyone.” According to Nepo, this compassion comes from developing empathy through experience. If we have experienced pain, we understand others’ pain and use that knowledge to help them. “We’re then in some kind of kinship with each other,” he says. “This is when love and suffering converge.” Nepo addresses this kind of love and suffering in Inside the Miracle, discussing how to stay vital and buoyant amid the storms of life.