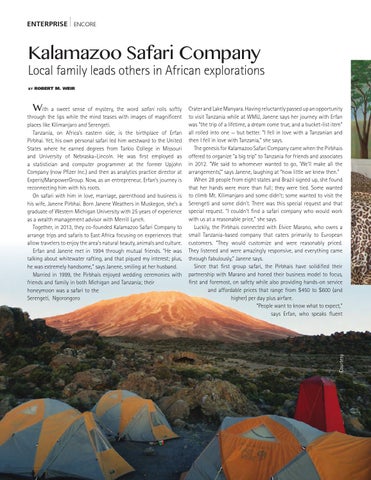 Local family leads others in African explorations by

With a sweet sense of mystery, the word safari rolls softly

through the lips while the mind teases with images of magnificent places like Kilimanjaro and Serengeti. Tanzania, on Africa’s eastern side, is the birthplace of Erfan Pirbhai. Yet, his own personal safari led him westward to the United States where he earned degrees from Tarkio College in Missouri and University of Nebraska–Lincoln. He was first employed as a statistician and computer programmer at the former Upjohn Company (now Pfizer Inc.) and then as analytics practice director at Experis/ManpowerGroup. Now, as an entrepreneur, Erfan’s journey is reconnecting him with his roots. On safari with him in love, marriage, parenthood and business is his wife, Janene Pirbhai. Born Janene Weathers in Muskegon, she’s a graduate of Western Michigan University with 25 years of experience as a wealth management advisor with Merrill Lynch. Together, in 2013, they co-founded Kalamazoo Safari Company to arrange trips and safaris to East Africa focusing on experiences that allow travelers to enjoy the area’s natural beauty, animals and culture. Erfan and Janene met in 1994 through mutual friends. “He was talking about whitewater rafting, and that piqued my interest; plus, he was extremely handsome,” says Janene, smiling at her husband. Married in 1999, the Pirbhais enjoyed wedding ceremonies with friends and family in both Michigan and Tanzania; their honeymoon was a safari to the Serengeti, Ngorongoro

Crater and Lake Manyara. Having reluctantly passed up an opportunity to visit Tanzania while at WMU, Janene says her journey with Erfan was “the trip of a lifetime, a dream come true, and a bucket-list item” all rolled into one — but better. “I fell in love with a Tanzanian and then I fell in love with Tanzania,” she says. The genesis for Kalamazoo Safari Company came when the Pirbhais offered to organize “a big trip” to Tanzania for friends and associates in 2012. “We said to whomever wanted to go, ‘We’ll make all the arrangements,’” says Janene, laughing at “how little we knew then.” When 28 people from eight states and Brazil signed up, she found that her hands were more than full; they were tied. Some wanted to climb Mt. Kilimanjaro and some didn’t; some wanted to visit the Serengeti and some didn’t. There was this special request and that special request. “I couldn’t find a safari company who would work with us at a reasonable price,” she says. Luckily, the Pirbhais connected with Elvice Marano, who owns a small Tanzania-based company that caters primarily to European customers. “They would customize and were reasonably priced. They listened and were amazingly responsive, and everything came through fabulously,” Janene says. Since that first group safari, the Pirbhais have solidified their partnership with Marano and honed their business model to focus, first and foremost, on safety while also providing hands-on service and affordable prices that range from $450 to $600 (and higher) per day plus airfare. “People want to know what to expect,” says Erfan, who speaks fluent