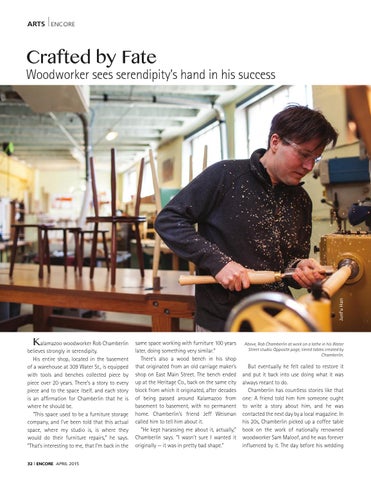 same space working with furniture 100 years later, doing something very similar.” There’s also a wood bench in his shop that originated from an old carriage maker’s shop on East Main Street. The bench ended up at the Heritage Co., back on the same city block from which it originated, after decades of being passed around Kalamazoo from basement to basement, with no permanent home. Chamberlin’s friend Jeff Weisman called him to tell him about it. “He kept harassing me about it, actually,” Chamberlin says. “I wasn’t sure I wanted it originally — it was in pretty bad shape.”

Above, Rob Chamberlin at work on a lathe in his Water Street studio. Opposite page, tiered tables created by Chamberlin.

But eventually he felt called to restore it and put it back into use doing what it was always meant to do. Chamberlin has countless stories like that one: A friend told him him someone ought to write a story about him, and he was contacted the next day by a local magazine. In his 20s, Chamberlin picked up a coffee table book on the work of nationally renowned woodworker Sam Maloof, and he was forever influenced by it. The day before his wedding

alamazoo woodworker Rob Chamberlin believes strongly in serendipity. His entire shop, located in the basement of a warehouse at 309 Water St., is equipped with tools and benches collected piece by piece over 20 years. There’s a story to every piece and to the space itself, and each story is an affirmation for Chamberlin that he is where he should be. “This space used to be a furniture storage company, and I’ve been told that this actual space, where my studio is, is where they would do their furniture repairs,” he says. “That’s interesting to me, that I’m back in the