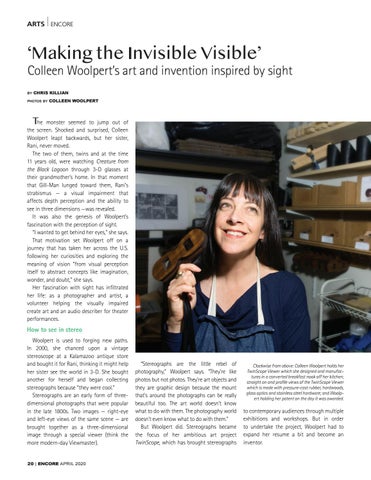 Colleen Woolpert’s art and invention inspired by sight by

he monster seemed to jump out of the screen. Shocked and surprised, Colleen Woolpert leapt backwards, but her sister, Rani, never moved. The two of them, twins and at the time 11 years old, were watching Creature from the Black Lagoon through 3-D glasses at their grandmother’s home. In that moment that Gill-Man lunged toward them, Rani’s strabismus — a visual impairment that affects depth perception and the ability to see in three dimensions —was revealed. It was also the genesis of Woolpert’s fascination with the perception of sight. “I wanted to get behind her eyes,” she says. That motivation set Woolpert off on a journey that has taken her across the U.S. following her curiosities and exploring the meaning of vision “from visual perception itself to abstract concepts like imagination, wonder, and doubt,” she says. Her fascination with sight has infiltrated her life: as a photographer and artist, a volunteer helping the visually impaired create art and an audio describer for theater performances.

How to see in stereo Woolpert is used to forging new paths. In 2000, she chanced upon a vintage stereoscope at a Kalamazoo antique store and bought it for Rani, thinking it might help her sister see the world in 3-D. She bought another for herself and began collecting stereographs because “they were cool.” Stereographs are an early form of threedimensional photographs that were popular in the late 1800s. Two images — right-eye and left-eye views of the same scene — are brought together as a three-dimensional image through a special viewer (think the more modern-day Viewmaster). 20 | ENCORE APRIL 2020

“Stereographs are the little rebel of photography,” Woolpert says. “They&#39;re like photos but not photos. They&#39;re art objects and they are graphic design because the mount that&#39;s around the photographs can be really beautiful too. The art world doesn&#39;t know what to do with them. The photography world doesn&#39;t even know what to do with them.” But Woolpert did. Stereographs became the focus of her ambitious art project TwinScope, which has brought stereographs

to contemporary audiences through multiple exhibitions and workshops. But in order to undertake the project, Woolpert had to expand her resume a bit and become an inventor.