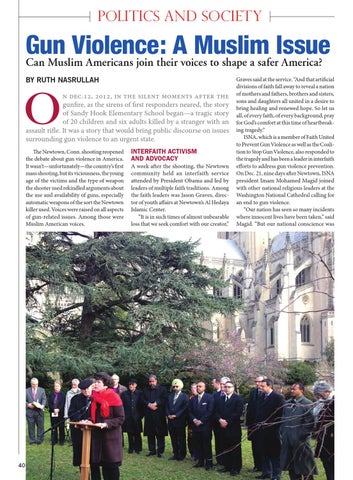 Gun Violence: A Muslim Issue Can Muslim Americans join their voices to shape a safer America? By Ruth Nasrullah

n Dec.12, 2012, in the silent moments after the gunfire, as the sirens of first responders neared, the story of Sandy Hook Elementary School began—a tragic story of 20 children and six adults killed by a stranger with an assault rifle. It was a story that would bring public discourse on issues surrounding gun violence to an urgent state. The Newtown, Conn. shooting reopened the debate about gun violence in America. It wasn’t—unfortunately—the country’s first mass shooting, but its viciousness, the young age of the victims and the type of weapon the shooter used rekindled arguments about the use and availability of guns, especially automatic weapons of the sort the Newtown killer used. Voices were raised on all aspects of gun-related issues. Among those were Muslim American voices.

Interfaith activism and advocacy A week after the shooting, the Newtown community held an interfaith service attended by President Obama and led by leaders of multiple faith traditions. Among the faith leaders was Jason Graves, director of youth affairs at Newtown’s Al Hedaya Islamic Center. “It is in such times of almost unbearable loss that we seek comfort with our creator,”

Graves said at the service. “And that artificial divisions of faith fall away to reveal a nation of mothers and fathers, brothers and sisters, sons and daughters all united in a desire to bring healing and renewed hope. So let us all, of every faith, of every background, pray for God’s comfort at this time of heartbreaking tragedy.” ISNA, which is a member of Faith United to Prevent Gun Violence as well as the Coalition to Stop Gun Violence, also responded to the tragedy and has been a leader in interfaith efforts to address gun violence prevention. On Dec. 21, nine days after Newtown, ISNA president Imam Mohamed Magid joined with other national religious leaders at the Washington National Cathedral calling for an end to gun violence. “Our nation has seen so many incidents where innocent lives have been taken,” said Magid. “But our national conscience was