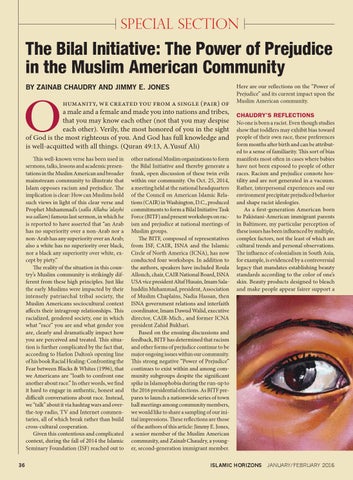 The Bilal Initiative: The Power of Prejudice in the Muslim American Community BY ZAINAB CHAUDRY AND JIMMY E. JONES

Here are our reflections on the “Power of Prejudice” and its current impact upon the Muslim American community.

humanity, we created you from a single (pair) of a male and a female and made you into nations and tribes, CHAUDRY’S REFLECTIONS that you may know each other (not that you may despise No one is born a racist. Even though studies each other). Verily, the most honored of you in the sight show that toddlers may exhibit bias toward of God is the most righteous of you. And God has full knowledge and people of their own race, these preferences form months after birth and can be attributis well-acquitted with all things. (Quran 49:13, A.Yusuf Ali) This well-known verse has been used in sermons, talks, lessons and academic presentations in the Muslim American and broader mainstream community to illustrate that Islam opposes racism and prejudice. The implication is clear: How can Muslims hold such views in light of this clear verse and Prophet Muhammad’s (salla Allahu ‘alayhi wa sallam) famous last sermon, in which he is reported to have asserted that “an Arab has no superiority over a non-Arab nor a non-Arab has any superiority over an Arab; also a white has no superiority over black, nor a black any superiority over white, except by piety.” The reality of the situation in this country’s Muslim community is strikingly different from these high principles. Just like the early Muslims were impacted by their intensely patriarchal tribal society, the Muslim Americans sociocultural context affects their intragroup relationships. This racialized, gendered society, one in which what “race” you are and what gender you are, clearly and dramatically impact how you are perceived and treated. This situation is further complicated by the fact that, according to Harlon Dalton’s opening line of his book Racial Healing: Confronting the Fear between Blacks & Whites (1996), that we Americans are “loath to confront one another about race.” In other words, we find it hard to engage in authentic, honest and difficult conversations about race. Instead, we “talk” about it via hashtag wars and overthe-top radio, TV and Internet commentaries, all of which break rather than build cross-cultural cooperation. Given this contentious and complicated context, during the fall of 2014 the Islamic Seminary Foundation (ISF) reached out to

other national Muslim organizations to form the Bilal Initiative and thereby generate a frank, open discussion of these twin evils within our community. On Oct. 25, 2014, a meeting held at the national headquarters of the Council on American Islamic Relations (CAIR) in Washington, D.C., produced commitments to form a Bilal Initiative Task Force (BITF) and present workshops on racism and prejudice at national meetings of Muslim groups. The BITF, composed of representatives from ISF, CAIR, ISNA and the Islamic Circle of North America (ICNA), has now conducted four workshops. In addition to the authors, speakers have included Roula Allouch, chair, CAIR National Board, ISNA USA vice president Altaf Husain, Imam Salahuddin Muhammad, president, Association of Muslim Chaplains, Nadia Hassan, then ISNA government relations and interfaith coordinator, Imam Dawud Walid, executive director, CAIR-Mich., and former ICNA president Zahid Bukhari. Based on the ensuing discussions and feedback, BITF has determined that racism and other forms of prejudice continue to be major ongoing issues within our community. This strong negative “Power of Prejudice” continues to exist within and among community subgroups despite the significant spike in Islamophobia during the run-up to the 2016 presidential elections. As BITF prepares to launch a nationwide series of town hall meetings among community members, we would like to share a sampling of our initial impressions. These reflections are those of the authors of this article: Jimmy E. Jones, a senior member of the Muslim American community, and Zainab Chaudry, a younger, second-generation immigrant member.

ed to a sense of familiarity. This sort of bias manifests most often in cases where babies have not been exposed to people of other races. Racism and prejudice connote hostility and are not generated in a vacuum. Rather, interpersonal experiences and our environment precipitate prejudiced behavior and shape racist ideologies. As a first-generation American born to Pakistani-American immigrant parents in Baltimore, my particular perception of these issues has been influenced by multiple, complex factors, not the least of which are cultural trends and personal observations. The influence of colonialism in South Asia, for example, is evidenced by a controversial legacy that mandates establishing beauty standards according to the color of one’s skin. Beauty products designed to bleach and make people appear fairer support a