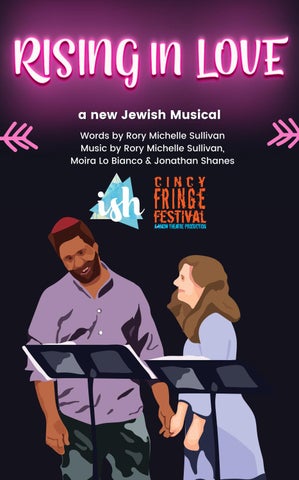 Thanks to the Generous Support from

the David C. Herriman Fund of the

would like to thank everyone who has been a part of bringing this musical to this stage of development, including Our cast and team for their creative input and contributions Emerging Artist Theatre & NYC 2019 staged reading team & audience Anna Jastrzembski for dramaturgy on early versions Musicians and recording team for Rising in Love Concept Album Friends, family, and colleagues who have provided feedback, input, and shared their stories with us Our generous supporters and funders at all stages YOU FOR BEING A PART IT!

Thank You to our Production Partner!

PIPER N. DAVIS (DIRECTOR) is an Emmy Award-winning actress, director, cultural director and singer who has performed and toured productions throughout the United States. She has had several stage and screen roles and loves doing voice-over work. Some of her directorial and performance credits include Ben Butler, To Be Black, The Snowy Day and Other Stories by Ezra Jack Keats; Richie and Blanche; Family Healing; Kill. Move. Paradise.; Cincinnati King; Harry and the Thief; Bare; Caroline, or Change and Open the Sky. Piper is grateful to God and sends love and joy to Mommie, her family, friends, and her doggy, Izzy. HAYDEN FLORO (PERCUSSION) Hayden Floro is a recent graduate from the University of Cincinnati College Conservatory of Music where he pursued a bachelor’s degree in Music Education and Jazz Drum-Set Performance. He grew up in Centerville, Ohio and has been playing the drums for over fourteen years. During that time, he’s studied under many great drummers including Jim Leslie, John Von Ohlen, Art Gore, John Taylor, Steve Houghton, Carl Allen, and Jeff Hamilton. Hayden is also an accomplished musical theater percussionist. He consistently works for the Cincinnati landmark productions theater company. Hayden has done many musicals ranging from les miserables to rocky horror picture show. Hayden regularly plays in a jazz trio setting. He frequently plays at Dee Felice, Nostalgia wine and jazz lounge, Caffe Vivace, Schwartz’s Point, and Washington Platform.

MICHAEL J. FREEMAN (STAFF) With deep roots in Cincinnati, Michael has over 25 years of experience as a communications and marketing professional, with the last 6 working within the Jewish community. Starting his career working at two local TV stations, Michael is a 7-time regional Emmy Award winning writer-producer. He then transitioned to sales and customer service before his best and hardest role as a stayat-home dad of his newborn twins for 3 ½ years. He reentered the workplace doing digital marketing before being led to his dream job with ish.

DORION KATRIEL EL (SCOTT) is a graduate from The School for Creative and Performing Arts in Cincinnati, Ohio where he majored in vocal music and musical theater. After high school, he joined the United States Navy and served on board the USS THEODORE ROOSEVELT CVN 71, where he was featured on the Today Show singing the National Anthem. In 2008, Dorion took an interest in Hebrew and became a cantorial soloist in 2016 with The Hebrew Educational Alliance, an egalitarian, Conservative Jewish congregation located in southeast Denver, Colorado. While actively studying to become a cantor, Dorion also became a Certified Natural Health Practitioner, specializing in bioenergetic therapy. Some of Dorion’s hobbies includes fishing, boating, crafting, dancing, and having a good time. HANNAH KLOEPFER (ELLE) is a writer, actor, and producer. A graduate of Columbia University, Hannah is the co-writer of Pitch In the Musical (and Zoomical) with Taylor Louderman and Nat Zegree and the producer of the annual Write Out Loud Contest. She is currently working as a writer’s assistant and development associate at an NYC-based production company; and lending her voice(s) to various animated characters and commercials. Recently: Co-Director of EMMA! for Broadway Workshop. Co-producer on My Cricket And Me, a docu-style comedy featuring Willie Nelson. Co-writer and star of cabaret series Swipe Right/Swipe Left. IG: @hannahkloepfer | www.hannahkloepfer.com

MARIE KRULEWITCH-BROWNE (STAFF, EXECUTIVE DIRECTOR) A Cincinnati transplant with local roots, Marie was born and raised in Indianapolis. Professionally, Marie brings a proven track record of success in the arts and community engagement. She began her career at ArtWorks, building an expertise in cross-departmental organizational management, marketing & development, administration and programming. With her feet firmly planted in the Cincinnati arts and Jewish communities, ish was founded in 2016. Marie has lent expertise and creativity across a variety of Cincinnati-based organizations and programs including serving on the founding cohort of BLINK, and has held leadership positions in other community organizations including the Jewish Federation of Cincinnati, Congregation Beth Adam, and MUSE Cincinnati’s Women’s Choir. ARIELA KURTZER (STAFF) Ariela Kurtzer is thrilled to be interning with ish this summer and be a part of Rising in Love. She goes to the University of Cincinnati, majoring in Operations Management and International Business and enjoys participating in the arts and theater in her free time.

ZAK LEMPERT (PRODUCTION MANAGER) A Cincinnati native and community educator, Zak has spent his professional life in Jewish programming and development. He graduated from the University of Cincinnati with a BA in Judaic Studies, and is currently pursuing his Master's in Jewish Nonprofit Management. He has previously worked with the Jewish Women's Theatre in Los Angeles and currently works with OneTable in addition to his work at ish. Zak's passion for Jewish & Israeli arts & culture stems from his time at summers at Camp Livingston, learning and teaching at Adath Israel Congregation, and leading services at Cincinnati Hillel. ALLIJO LESTER (STAFF) is an educator, designer, and research expert with a decade of experience in educational programming and community engagement design. Drawing on all three roles, AlliJo collaborates with community stakeholders to cultivate vibrant spaces where one’s rich historical and cultural narrative can be fostered, preserved, and sustained through socially just, transformative paradigms and placebased pedagogies. With a decade of teaching and coaching experience, and over five years in collaborative program design, AlliJo is on a mission to create playful and vibrant spaces that enhance our joy of learning.

MOIRA LO BIANCO (MUSIC) co-composed the original six songs found on the RISING IN LOVE Concept Album. Moira is an Italian born pianist, composer, and arranger. Moira served as Piano Faculty at Berklee College of Music where she also founded and codirected the ‘Equinox Music Festival’. Recently, she recorded for ‘Steinway Spirio’ and her solo album ‘Imago’ was released in March 2016, produced by Steinway & Sons label (NAXOS distribution). ASHLEY OLIVIA MORTON (JAQ) is a well rounded performance artist from Cincinnati, Ohio. Pre-pandemic, Ashley could be found on stage with The Carnegie and The Children’s Theatre of Cincinnati as well as regularly performing with Pones and InBocca Performance, making sight-specific and devised works. During the pandemic, Ashley kept busy with Dream& as part of Cincy Digital Fringe, Godspell with The Carnegie’s Creative Disruption Committee, Poe at the Kirkwood Inn, and most recently, operatic dance film 13&Republic. Art and community is very important to Ashley and she has had the honor of performing with the Cincinnati Men’s Chorus, Muse, The Cincinnati Pops, Contemporary Art Center, and The Cincinnati Opera, in pieces bringing up social justice issues in our community. All of Ashley’s creative endeavors are to make it known that you (yes, YOU) matter to her.

MEGAN RAHILL (STAFF) is an impact-oriented project manager with experience at the intersection of social services, healthcare, and the arts. Megan currently serves as Summer Project Manager and School Liaison as part of Cincinnati's Jewish Teen Initiative. A long-time member of the Cincinnati arts nonprofit community, her work ranges from youth impact to organizational leadership. Megan is thrilled to join ish this Summer, and hopes you enjoy the show!

ERICA RIDDICK (DRAMATURGE) Erica Riddick loves improvisation in all forms, theatre, ballroom dancing, live action role play, and more. She is a regular cast member with Dinner Detective Mystery Theatre, has been a member of three improv troupes (founder of Waitlisted), performed in local productions and Haunted Houses, and participated in devised theatre, including 2019 original production of Count Smackula and His Three Scares, as Zadie Nageir. Playwright/actor credits include The Potluck and Know Theatre Serials! Cubicle. Erica loves reading multiverse fiction when not sleeping, eating or earning money for both, and is thrilled to merge improv and Judaism in Rising in Love.

Thank You to for your support

SUSAN SCHAPIRO (CONNIE) was thrilled to return to theater eleven years ago after a 41year hiatus. She has previously performed throughout the greater Cincinnati area with East Side Players, Loveland Stage Company, Queen City Productions, Footlighters, and Mariemont Players. Susan's favorite roles include Miss Andrew in Mary Poppins, Domina in A Funny Thing Happened on the Way to the Forum, and Ida Straus in Titanic the Musical. A retired neonatologist, she also enjoys choral singing. Very new to ish, Susan is still pinching herself over having landed in the company of such a talented, supportive, and generally wonderful group of people. Enjoy! JONATHAN SHANES (MUSIC) composes and produces music for feature films, television networks like Netflix and HBO, production companies like Bleeding Fingers Music, and a diverse mix of popular albums, stage theaters, and other musical outlets. Jonathan has contributed to film and television projects including Breaking In (Gabrielle Union), Sense8 (Netflix Original Series), Jungle (Daniel Radcliffe), A Hologram for the King (Tom Hanks), Killer Elite (Robert De Niro), The Darkness (Kevin Bacon), The International (Clive Owen, Naomi Watts), Miles (Molly Shannon), John From Cincinnati (HBO Original Series), and many more.

JESSICA L. G. STEUVER (ROSIE) (she/her), a native of Cleveland, OH, is a passionate music educator, performer, and student. A former middle school choir director, Jessica is currently pursuing a Master of Music degree in Music Education and working as a GA at University of Cincinnati's CollegeConservatory of Music. Additionally, Jessica serves as a teaching artist for Cincinnati Playhouse in the Park and as a section leader for the Young Professionals Choral Collective. Jessica has been privileged to perform with the Cincinnati Opera, The Carnegie, and Cincinnati Landmark Productions, and is thrilled to add Ish to the list! www.jessicalgsteuver.com RORY MICHELLE SULLIVAB (CREATOR; WORDS & MUSIC) is a singer-songwriter, composerlibrettist, musician, and Jewish educator. She is deeply grateful to partner with ish on developing RISING IN LOVE and wishes to thank everyone who has been a part of bringing it to where it is today - that includes you! Special thanks at this milestone to Marie, Zak, Erica, cast, band, and creative team; family, friends, and colleagues for support and feedback; and to you for joining us. Rory Michelle is a member of the Dramatists Guild, the Alliance for Jewish Theatre, and is a Jewish Rock Radio artist. Find more at www.rorymichelle.com.

BROOKS TAYLOR (BASS) (they/them) is a double bassist and graduate of UC's College-Conservatory of Music. As well as teaching music at MYCincinnati, an ElSistema inspired non-profit youth orchestra program, Brooks gigs and performs a variety of genres and instruments, and is the Youth Programming Coordinator for Cincinnati's chapter of Girls Rock, a music camp for girls and trans youth. Brooks aspires to continue their career as a contemporary musical performer and music teacher, as well as help to create more equitable spaces for musicians that carry marginalized identities SIMONE ZAMORE (MAUD) is excited to reprise the role of Maud for this production! She received her bachelor’s degree in Dramatic English from Princeton University and her master’s in Arts Education from Harvard. She currently works as the Education Director for Prospect Theater Company. Regional Tours include Sophisticated Ladies (Inside Broadway) and Tommy (Jeffrey Finn). Regional/off-Broadway productions include President Harding is a Rock Star (Les Freres Corbusier), The Flood (Prospect), and Little Shop of Horrors (St. Michael’s Playhouse). Podcasts include The Last Magic Negro (or Chad's Great Awokening) (Bite-Sized Broadway).

Chutzp h alive with your gift of support