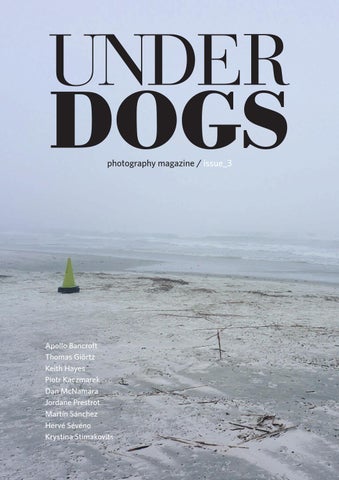 Designer/Editor: Isa Gelb Cover &amp; back cover: Thomas Giรถrtz All images and text published in Underdogs are the sole property of the featured photographers. NO image can be reproduced, edited, copied or distributed without the express written permission of its legal owner. NO part of the publication may be reproduced in any form without the written consent of the publisher.

Welcome to the third issue of Underdogs. The starting point for this editorial is something every Flickr user is familiar with: Favorites. Flickr deﬁnes Favorites as “photos by other people that you want to bookmark... so they are easy to ﬁnd later.”I believe this deﬁnition is rather conservative. For the person who receives or gives “Favorites,” their meaning can be more loaded. In his blog post, “How Many ‘Favorites’ Or ‘Likes’ Are Enough?,” Eric Kim found that receiving Favorites encouraged him to take and share more photos. However, his use of Favorites as critical guidance inhibited his artistic growth. He ultimately gave up social media for a period of time to focus on the photos he needed to take, instead of the photos other people wanted to see. Eric’s blog post extensively reﬂects on what it means for a photographer to receive Favorites. A follow-up question I wish to pose is: what does it mean for a photographer to give Favorites? I see an analogy between the act of giving a Favorite and taking a photo. Many of us take photos because they express meanings that are either diﬃcult or impossible to put into words. Favorites provide a similar mode of expression. By giving a Favorite, we may not be able to explain why we like a photo, but we can show that we do. Both giving a Favorite and taking a photo allow for nearly instantaneous expression with the click of a button. When we give a Favorite, it is as if we are saying that if we stood in the shoes of the photographer whose photo is shown, we would have pressed the shutter button ourselves. We more or less say: your eﬀort was worth it. This type of aﬃrmation is valuable. However, the problem is that a click of the Favorite button can be the end of our contemplation of a photo, for both the giver and the recipient—when it should be the very beginning. I wouldn’t say the contemplation of a photo requires an explicit discussion or verbal response. In other words, I wouldn’t argue that comments are intrinsically better than Favorites. What I would recommend instead is simply mindfulness toward photography—both on the part of the photographer and the viewer. Mindfulness doesn’t necessarily mean seriousness. For me, it can be as simple as going out with my camera or browsing a contact’s photos—and actively enjoying what I am doing. As you read Issue 3 of Underdogs, I invite you to consider what helps you to better appreciate photography. I’d be interested to hear your responses.

HIS CAMERAS I use a Panasonic GX1 and LX5.

I am making pictures without any purpose. To me it’s like listening to my favourite music, reading a novel or even simpler like having an ice cold beer on a warm evening in a bar at some beach. It’s making me happy and I will never let it turn into some kind of a grindstone. I don’t relate to my stuﬀ in terms of whether it’s art or not or if I could make a couple of bucks out of it. Neither am I seeking anything meaningful in my pictures: I just don’t care. I am truly grateful that I have something that excites me and gives me enjoyment in these shitty times. That’s why I go out and shoot – and at least sometimes feeling like a lucky man is a good point, isn’t it?

A few sentences about not only my photography. Perception depends on our upbringing, environment, experience and acquired knowledge. For this reason some people perceive the surrounding reality diﬀerently than others. I like things ugly and beautiful at the same time, the best are those images that move simultaneously multiple threads but without any lies and manipulation, topped with a touch of humour. I agree that a camera as a powerful medium of expression, associated with a feeling, in the face of volatile fact, oﬀers a variety of perception, so that it is an extension of the mind.These photos characterized by syncretism are much more interesting to me.

I don’t like to go out with a speciﬁc idea of what I would like to photograph. Having a preconceived notion of what I want to do closes me oﬀ to other images that may be around me. I prefer to wander around my neighborhood and record anything I ﬁnd personally arresting. Mostly I enjoy hunting for color and form in objects that people seem to pass by everyday. 30

When I sort through it all I ﬁnd that I have often captured images of people that seem to be escaping city life; fragments of neglected city infrastructure and nature; or objects abandoned by their owners. I try not to assign any deeper meaning to it other than that I enjoy ﬁnding beauty in the matter of everyday life.

HIS CAMERAS I mainly use a Pentax P30 for ﬁlm and a Pentax K5-II for digital. Otherwise I use a Minolta SRT101b, a Canon Ftb and disposable cameras. Two of the following pictures were taken with that strange thing called HP PhotoSmart C945 which was my ﬁrst digital camera and is now out of work.

The honeymoon has been over for some time now. I&#39;m no longer a ﬂaneuse driven to photograph daily and almost anything that sings a catchy tune. It&#39;s jazz I am after now, something layered, multidimensional and rewarding to chew on, at least for a little while. Structures to the visual plane remain important, but I am more consciously working the potential for reverie and mnemic reﬂection that I know resides somewhere in the spaces between objects, forms and tonal values. I am not sure yet into which direction I am heading precisely, only that I wish to take further these attempts to estrange the familiar, to achieve harmony from incongruous or complex physical environments. Perhaps I&#39;ll eventually dare to step into deeper waters following a dream of barely audible sound. I shall still wander the streets like Alice though, through a looking glass.

HER CAMERAS I&#39;ve been mostly using the Fuji Xpro for the past two years, Before that Nikon D300, Olympus EP2. I also have a much loved but sadly underused Minolta Autocord twin lens medium format camera.

MANy THANKS TO APOLLO BANCROFT https://www.ﬂickr.com/photos/gadﬂy73/

Special thanks to John Koch for his help on the editorial https://www.ﬂickr.com/photos/orphotographer/ 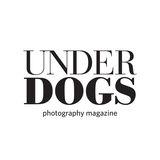