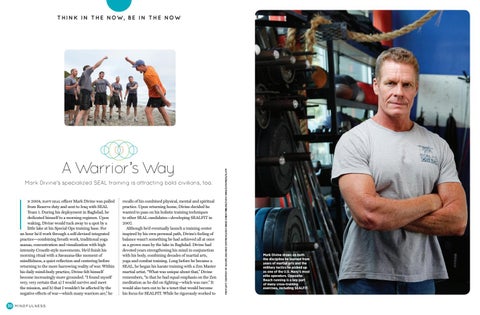 n 2004, navy seal officer Mark Divine was pulled from Reserve duty and sent to Iraq with SEAL Team 1. During his deployment in Baghdad, he dedicated himself to a morning regimen. Upon waking, Divine would tuck away to a spot by a little lake at his Special Ops training base. For an hour he’d work through a self-devised integrated practice—combining breath work, traditional yoga asanas, concentration and visualization with high intensity Crossfit-style movements. He’d finish his morning ritual with a Savasana-like moment of mindfulness, a quiet reflection and centering before returning to the more harrowing reality of war. Within his daily mind-body practice, Divine felt himself become increasingly more grounded. “I found myself very, very certain that a) I would survive and meet the mission, and b) that I wouldn’t be affected by the negative effects of war—which many warriors are,” he

recalls of his combined physical, mental and spiritual practice. Upon returning home, Divine decided he wanted to pass on his holistic training techniques to other SEAL candidates—developing SEALFIT in 2007. Although he’d eventually launch a training center inspired by his own personal path, Divine’s feeling of balance wasn’t something he had achieved all at once as a grown man by the lake in Baghdad. Divine had devoted years strengthening his mind in conjunction with his body, combining decades of martial arts, yoga and combat training. Long before he became a SEAL, he began his karate training with a Zen Master martial artist. “What was unique about that,” Divine remembers, “is that he had equal emphasis on the Zen meditation as he did on fighting—which was rare.” It would also turn out to be a tenet that would become his focus for SEALFIT. While he rigorously worked to

Mark Divine draws on both the discipline he learned from years of martial arts and the military tactics he picked up as one of the U.S. Navy’s most elite operators. Opposite: Beach running is a key part of many cross-training exercises, including SEALFIT.

clarity and increased awareness that is often missing in other physical training practices. While SEALFIT was originally designed for SEAL and Special Operations candidates, one of the biggest rewards for Divine is that “entrepreneurs and moms and Crossfitters and all sorts of different types” come to his training. Divine’s personal training has evolved into a philosophy that doesn’t just benefit SEAL candidates. He’s cognizant of how an integrated mind-body workout is valuable in all walks of life. Divine’s practices can help prepare for a meeting or an important presentation. They help people grow from their mistakes and learn how to eradicate regret. Whether the participants at SEALFIT are SEAL trainee candidates or working moms, Divine’s goal for them is clear: “The aim is to teach people how to serve powerfully from a place of self-mastery where they’re constantly evolving.” Divine believes physical training, coupled with an awareness of breath and mindfulness, allows people to “show up more powerfully in service to their family, company and even humanity.” With the right physical, mental and emotional development, anyone can approach life with the purposeful calm of a warrior monk.

+ ONLINE SUBSCRIPTION + APPS FOR 75% OFF

earn his black belt, he simultaneously learned the arts of concentration and breath control. His studies inspired him to pursue a new ethos as a warrior and leader, and Divine left the corporate world for SEAL training in 1990. On the first day of his training, there were 185 other equally fit and eager students ready to prove themselves and succeed in a physically demanding program. But by the end of training, only 19 remained—with Mark Divine leading the pack as his class’s “Honor man.” He’d eventually understand that his attention to detail, mindfulness and concentration—practices he had spent years developing—were the reason for his triumph. He’d continue on his quest for physical, mental and emotional development even after becoming a SEAL. With programs offered online as well as in their Encinitas, California-based training center, SEALFIT is the sum of Divine’s life’s work in achieving mind and body balance. Hinged on an integrated program called “5 Mountain Training,” Divine and his team train participants physically, mentally, emotionally, intuitively and spiritually. With a life philosophy he’s coined “Unbeatable Mind,” there’s a distinct focus on

to each week’s issue via Newsweek apps for iPad, Kindle Fire and Android 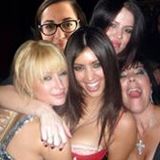