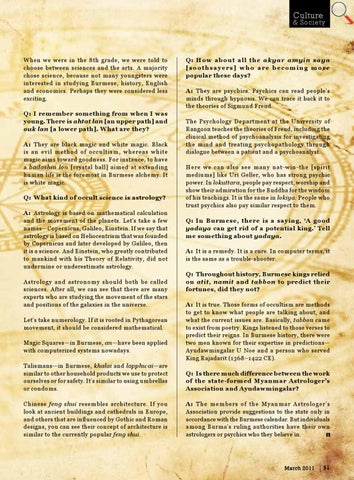 When we were in the 8th grade, we were told to choose between sciences and the arts. A majority chose science, because not many youngsters were interested in studying Burmese, history, English and economics. Perhaps they were considered less exciting. Q: I remember something from when I was young. There is ahtat lan [an upper path] and ouk lan [a lower path]. What are they? A: They are black magic and white magic. Black is an evil method of occultism, whereas white magic aims toward goodness. For instance, to have a badashin lon [crystal ball] aimed at extending human life is the foremost in Burmese alchemy. It is white magic. Q: What kind of occult science is astrology? A: Astrology is based on mathematical calculation and the movement of the planets. Let’s take a few names—Copernicus, Galileo, Einstein. If we say that astrology is based on Heliocentrism that was founded by Copernicus and later developed by Galileo, then it is a science. And Einstein, who greatly contributed to mankind with his Theory of Relativity, did not undermine or underestimate astrology. Astrology and astronomy should both be called sciences. After all, we can see that there are many experts who are studying the movement of the stars and positions of the galaxies in the universe. Let’s take numerology. If it is rooted in Pythagorean movement, it should be considered mathematical. Magic Squares—in Burmese, an—have been applied with computerized systems nowadays. Talismans—in Burmese, khalai and lapphwai—are similar to other household products we use to protect ourselves or for safety. It’s similar to using umbrellas or condoms. Chinese feng shui resembles architecture. If you look at ancient buildings and cathedrals in Europe, and others that are influenced by Gothic and Roman designs, you can see their concept of architecture is similar to the currently popular feng shui.

Q: How about all the akyar amyin saya [soothsayers] who are becoming more popular these days? A: They are psychics. Psychics can read people’s minds through hypnosis. We can trace it back it to the theories of Sigmund Freud. The Psychology Department at the University of Rangoon teaches the theories of Freud, including the clinical method of psychoanalysis for investigating the mind and treating psychopathology through dialogue between a patient and a psychoanalyst. Here we can also see many nat-win-the [spirit mediums] like Uri Geller, who has strong psychic power. In lokuttara, people pay respect, worship and show their admiration for the Buddha for the wisdom of his teachings. It is the same in lokiya. People who trust psychics also pay similar respect to them. Q: In Burmese, there is a saying, ‘A good yadaya can get rid of a potential king.’ Tell me something about yadaya. A: It is a remedy. It is a cure. In computer terms, it is the same as a trouble-shooter. Q: Throughout history, Burmese kings relied on atit, namit and tabbon to predict their fortunes, did they not? A: It is true. Those forms of occultism are methods to get to know what people are talking about, and what the current issues are. Basically, tabbon came to exist from poetry. Kings listened to those verses to predict their reigns. In Burmese history, there were two men known for their expertise in predictions— Ayudawmingalar U Noe and a person who served King Rajadarit (1368–1422 CE). Q: Is there much difference between the work of the state-formed Myanmar Astrologer’s Association and Ayudawmingalar? A: The members of the Myanmar Astrologer’s Association provide suggestions to the state only in accordance with the Burmese calendar. But individuals among Burma’s ruling authorities have their own astrologers or psychics who they believe in.