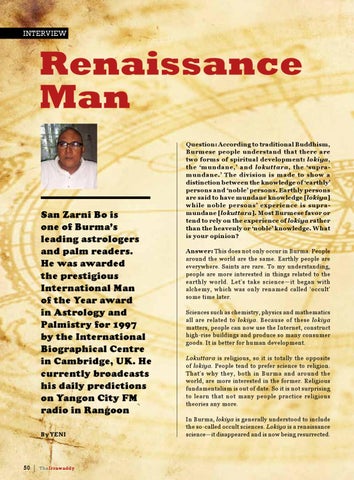 San Zarni Bo is one of Burma’s leading astrologers and palm readers. He was awarded the prestigious International Man of the Year award in Astrology and Palmistry for 1997 by the International Biographical Centre in Cambridge, UK. He currently broadcasts his daily predictions on Yangon City FM radio in Rangoon By YENI

Question: According to traditional Buddhism, Burmese people understand that there are two forms of spiritual development: lokiya, the ‘mundane,’ and lokuttara, the ‘supramundane.’ The division is made to show a distinction between the knowledge of ‘earthly’ persons and ‘noble’ persons. Earthly persons are said to have mundane knowledge [lokiya] while noble persons’ experience is supramundane [lokuttara]. Most Burmese favor or tend to rely on the experience of lokiya rather than the heavenly or ‘noble’ knowledge. What is your opinion? Answer: This does not only occur in Burma. People around the world are the same. Earthly people are everywhere. Saints are rare. To my understanding, people are more interested in things related to the earthly world. Let’s take science—it began with alchemy, which was only renamed called ‘occult’ some time later. Sciences such as chemistry, physics and mathematics all are related to lokiya. Because of these lokiya matters, people can now use the Internet, construct high-rise buildings and produce so many consumer goods. It is better for human development. Lokuttara is religious, so it is totally the opposite of lokiya. People tend to prefer science to religion. That’s why they, both in Burma and around the world, are more interested in the former. Religious fundamentalism is out of date. So it is not surprising to learn that not many people practice religious theories any more. In Burma, lokiya is generally understood to include the so-called occult sciences. Lokiya is a renaissance science—it disappeared and is now being resurrected.