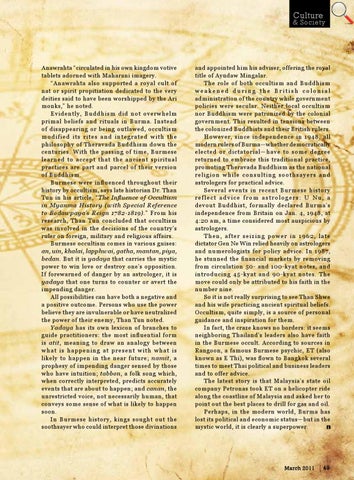 Anawrahta “circulated in his own kingdom votive tablets adorned with Maharani imagery. “Anawrahta also supported a royal cult of nat or spirit propitiation dedicated to the very deities said to have been worshipped by the Ari monks,” he noted. Evidently, Buddhism did not overwhelm primal beliefs and rituals in Burma. Instead of disappearing or being outlawed, occultism modified its rites and integrated with the philosophy of Theravada Buddhism down the centuries. With the passing of time, Burmese learned to accept that the ancient spiritual practices are part and parcel of their version of Buddhism. Burmese were influenced throughout their history by occultism, says late historian Dr. Than Tun in his article, “The Influence of Occultism in Myanma History (with Special Reference to Bodawpaya’s Reign 1782-1819).” From his research, Than Tun concluded that occultism was involved in the decisions of the country’s ruler on foreign, military and religious affairs. Burmese occultism comes in various guises: an, uin, khalai, lapphwai, gatha, mantan, piya, bedan. But it is yadaya that carries the mystic power to win love or destroy one’s opposition. If forewarned of danger by an astrologer, it is yadaya that one turns to counter or avert the impending danger. All possibilities can have both a negative and a positive outcome. Persons who use the power believe they are invulnerable or have neutralized the power of their enemy, Than Tun noted. Yadaya has its own lexicon of branches to guide practitioners: the most influential form is atit, meaning to draw an analogy between what is happening at present with what is likely to happen in the near future; namit, a prophesy of impending danger sensed by those who have intuition; tabbon, a folk song which, when correctly interpreted, predicts accurately events that are about to happen; and canan, the unrestricted voice, not necessarily human, that conveys some sense of what is likely to happen soon. In Burmese history, kings sought out the soothsayer who could interpret those divinations

and appointed him his adviser, offering the royal title of Ayudaw Mingalar. The role of both occultism and Buddhism weakened during the British colonial administration of the country while government policies were secular. Neither local occultism nor Buddhism were patronized by the colonial government. This resulted in tensions between the colonized Buddhists and their British rulers. However, since independence in 1948, all modern rulers of Burma—whether democratically elected or dictatorial—have to some degree returned to embrace this traditional practice, promoting Theravada Buddhism as the national religion while consulting soothsayers and astrologers for practical advice. Several events in recent Burmese history reflect advice from astrologers: U Nu, a devout Buddhist, formally declared Burma’s independence from Britain on Jan. 4, 1948, at 4:20 am, a time considered most auspicious by astrologers. Then, after seizing power in 1962, late dictator Gen Ne Win relied heavily on astrologers and numerologists for policy advice. In 1987, he stunned the financial markets by removing from circulation 50- and 100-kyat notes, and introducing 45-kyat and 90-kyat notes. The move could only be attributed to his faith in the number nine. So it is not really surprising to see Than Shwe and his wife practicing ancient spiritual beliefs. Occultism, quite simply, is a source of personal guidance and inspiration for them. In fact, the craze knows no borders: it seems neighboring Thailand’s leaders also have faith in the Burmese occult. According to sources in Rangoon, a famous Burmese psychic, ET (also known as E Thi), was flown to Bangkok several times to meet Thai political and business leaders and to offer advice. The latest story is that Malaysia’s state oil company Petronas took ET on a helicopter ride along the coastline of Malaysia and asked her to point out the best places to drill for gas and oil. Perhaps, in the modern world, Burma has lost its political and economic status—but in the mystic world, it is clearly a superpower.