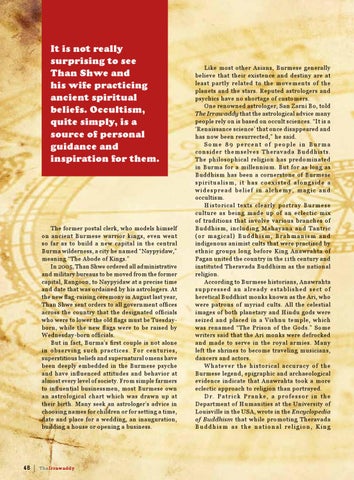 It is not really surprising to see Than Shwe and his wife practicing ancient spiritual beliefs. Occultism, quite simply, is a source of personal guidance and inspiration for them.

The former postal clerk, who models himself on ancient Burmese warrior kings, even went so far as to build a new capital in the central Burma wilderness, a city he named “Naypyidaw,” meaning “The Abode of Kings.” In 2005, Than Shwe ordered all administrative and military bureaus to be moved from the former capital, Rangoon, to Naypyidaw at a precise time and date that was ordained by his astrologers. At the new flag-raising ceremony in August last year, Than Shwe sent orders to all government offices across the country that the designated officials who were to lower the old flags must be Tuesdayborn, while the new flags were to be raised by Wednesday-born officials. But in fact, Burma’s first couple is not alone in observing such practices. For centuries, superstitious beliefs and supernatural omens have been deeply embedded in the Burmese psyche and have influenced attitudes and behavior at almost every level of society. From simple farmers to influential businessmen, most Burmese own an astrological chart which was drawn up at their birth. Many seek an astrologer’s advice in choosing names for children or for setting a time, date and place for a wedding, an inauguration, building a house or opening a business.

Like most other Asians, Burmese generally believe that their existence and destiny are at least partly related to the movements of the planets and the stars. Reputed astrologers and psychics have no shortage of customers. One renowned astrologer, San Zarni Bo, told The Irrawaddy that the astrological advice many people rely on is based on occult sciences. “It is a ‘Renaissance science’ that once disappeared and has now been resurrected,” he said. Some 89 percent of people in Burma consider themselves Theravada Buddhists. The philosophical religion has predominated in Burma for a millennium. But for as long as Buddhism has been a cornerstone of Burmese spiritualism, it has coexisted alongside a widespread belief in alchemy, magic and occultism. Historical texts clearly portray Burmese culture as being made up of an eclectic mix of traditions that involve various branches of Buddhism, including Mahayana and Tantric (or magical) Buddhism, Brahmanism and indigenous animist cults that were practised by ethnic groups long before King Anawrahta of Pagan united the country in the 11th century and instituted Theravada Buddhism as the national religion. According to Burmese historians, Anawrahta suppressed an already established sect of heretical Buddhist monks known as the Ari, who were patrons of myriad cults. All the celestial images of both planetary and Hindu gods were seized and placed in a Vishnu temple, which was renamed “The Prison of the Gods.” Some writers said that the Ari monks were defrocked and made to serve in the royal armies. Many left the shrines to become traveling musicians, dancers and actors. Whatever the historical accuracy of the Burmese legend, epigraphic and archaeological evidence indicate that Anawrahta took a more eclectic approach to religion than portrayed. Dr. Patrick Pranke, a professor in the Department of Humanities at the University of Louisville in the USA, wrote in the Encyclopedia of Buddhism that while promoting Theravada Buddhism as the national religion, King