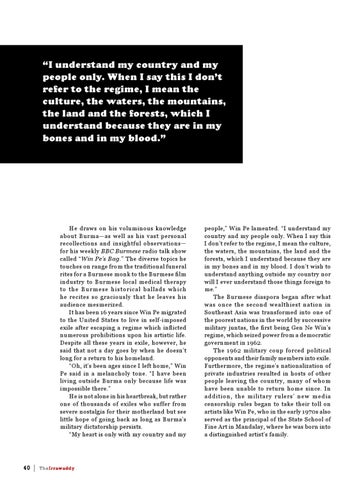 “I understand my country and my people only. When I say this I don’t refer to the regime, I mean the culture, the waters, the mountains, the land and the forests, which I understand because they are in my bones and in my blood.”

He draws on his voluminous knowledge about Burma—as well as his vast personal recollections and insightful observations— for his weekly BBC Burmese radio talk show called “Win Pe’s Bag.” The diverse topics he touches on range from the traditional funeral rites for a Burmese monk to the Burmese film industry to Burmese local medical therapy to the Burmese historical ballads which he recites so graciously that he leaves his audience mesmerized. It has been 16 years since Win Pe migrated to the United States to live in self-imposed exile after escaping a regime which inflicted numerous prohibitions upon his artistic life. Despite all these years in exile, however, he said that not a day goes by when he doesn’t long for a return to his homeland. “Oh, it’s been ages since I left home,” Win Pe said in a melancholy tone. “I have been living outside Burma only because life was impossible there.” He is not alone in his heartbreak, but rather one of thousands of exiles who suffer from severe nostalgia for their motherland but see little hope of going back as long as Burma’s military dictatorship persists. “My heart is only with my country and my

people,” Win Pe lamented. “I understand my country and my people only. When I say this I don’t refer to the regime, I mean the culture, the waters, the mountains, the land and the forests, which I understand because they are in my bones and in my blood. I don’t wish to understand anything outside my country nor will I ever understand those things foreign to me.” The Burmese diaspora began after what was once the second wealthiest nation in Southeast Asia was transformed into one of the poorest nations in the world by successive military juntas, the first being Gen Ne Win’s regime, which seized power from a democratic government in 1962. The 1962 military coup forced political opponents and their family members into exile. Furthermore, the regime’s nationalization of private industries resulted in hosts of other people leaving the country, many of whom have been unable to return home since. In addition, the military rulers’ new media censorship rules began to take their toll on artists like Win Pe, who in the early 1970s also served as the principal of the State School of Fine Art in Mandalay, where he was born into a distinguished artist’s family.