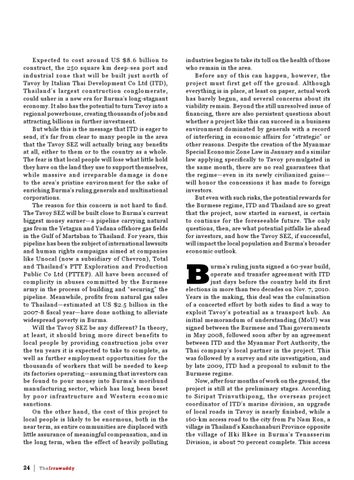 Expected to cost around US $8.6 billion to construct, the 250 square km deep-sea port and industrial zone that will be built just north of Tavoy by Italian Thai Development Co Ltd (ITD), Thailand’s largest construction conglomerate, could usher in a new era for Burma’s long-stagnant economy. It also has the potential to turn Tavoy into a regional powerhouse, creating thousands of jobs and attracting billions in further investment. But while this is the message that ITD is eager to send, it’s far from clear to many people in the area that the Tavoy SEZ will actually bring any benefits at all, either to them or to the country as a whole. The fear is that local people will lose what little hold they have on the land they use to support themselves, while massive and irreparable damage is done to the area’s pristine environment for the sake of enriching Burma’s ruling generals and multinational corporations. The reason for this concern is not hard to find. The Tavoy SEZ will be built close to Burma’s current biggest money earner—a pipeline carrying natural gas from the Yetagun and Yadana offshore gas fields in the Gulf of Martaban to Thailand. For years, this pipeline has been the subject of international lawsuits and human rights campaigns aimed at companies like Unocal (now a subsidiary of Chevron), Total and Thailand’s PTT Exploration and Production Public Co Ltd (PTTEP). All have been accused of complicity in abuses committed by the Burmese army in the process of building and “securing” the pipeline. Meanwhile, profits from natural gas sales to Thailand—estimated at US $2.5 billion in the 2007-8 fiscal year—have done nothing to alleviate widespread poverty in Burma. Will the Tavoy SEZ be any different? In theory, at least, it should bring more direct benefits to local people by providing construction jobs over the ten years it is expected to take to complete, as well as further employment opportunities for the thousands of workers that will be needed to keep its factories operating—assuming that investors can be found to pour money into Burma’s moribund manufacturing sector, which has long been beset by poor infrastructure and Western economic sanctions. On the other hand, the cost of this project to local people is likely to be enormous, both in the near term, as entire communities are displaced with little assurance of meaningful compensation, and in the long term, when the effect of heavily polluting

industries begins to take its toll on the health of those who remain in the area. Before any of this can happen, however, the project must first get off the ground. Although everything is in place, at least on paper, actual work has barely begun, and several concerns about its viability remain. Beyond the still unresolved issue of financing, there are also persistent questions about whether a project like this can succeed in a business environment dominated by generals with a record of interfering in economic affairs for “strategic” or other reasons. Despite the creation of the Myanmar Special Economic Zone Law in January and a similar law applying specifically to Tavoy promulgated in the same month, there are no real guarantees that the regime—even in its newly civilianized guise— will honor the concessions it has made to foreign investors. But even with such risks, the potential rewards for the Burmese regime, ITD and Thailand are so great that the project, now started in earnest, is certain to continue for the foreseeable future. The only questions, then, are what potential pitfalls lie ahead for investors, and how the Tavoy SEZ, if successful, will impact the local population and Burma’s broader economic outlook.

urma’s ruling junta signed a 60-year build, operate and transfer agreement with ITD just days before the country held its first elections in more than two decades on Nov. 7, 2010. Years in the making, this deal was the culmination of a concerted effort by both sides to find a way to exploit Tavoy’s potential as a transport hub. An initial memorandum of understanding (MoU) was signed between the Burmese and Thai governments in May 2008, followed soon after by an agreement between ITD and the Myanmar Port Authority, the Thai company’s local partner in the project. This was followed by a survey and site investigation, and by late 2009, ITD had a proposal to submit to the Burmese regime. Now, after four months of work on the ground, the project is still at the preliminary stages. According to Siripat Trinvuthipong, the overseas project coordinator of ITD’s marine division, an upgrade of local roads in Tavoy is nearly finished, while a 160-km access road to the city from Pu Nam Ron, a village in Thailand’s Kanchanaburi Province opposite the village of Hki Hkee in Burma’s Tenasserim Division, is about 70 percent complete. This access