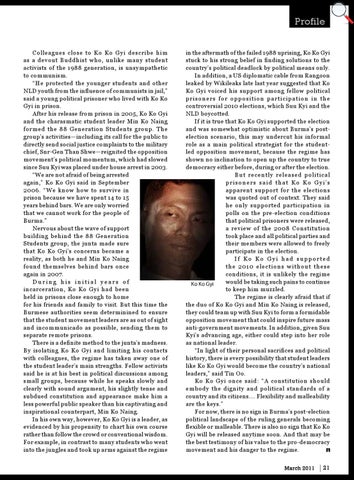 Profile Colleagues close to Ko Ko Gyi describe him as a devout Buddhist who, unlike many student activists of the 1988 generation, is unsympathetic to communism. “He protected the younger students and other NLD youth from the influence of communists in jail,” said a young political prisoner who lived with Ko Ko Gyi in prison. After his release from prison in 2005, Ko Ko Gyi and the charasmatic student leader Min Ko Naing formed the 88 Generation Students group. The group’s activities—including its call for the public to directly send social justice complaints to the military chief, Snr-Gen Than Shwe—reignited the opposition movement’s political momentum, which had slowed since Suu Kyi was placed under house arrest in 2003. “We are not afraid of being arrested again,” Ko Ko Gyi said in September 2006. “We know how to survive in prison because we have spent 14 to 15 years behind bars. We are only worried that we cannot work for the people of Burma.” Nervous about the wave of support building behind the 88 Generation Students group, the junta made sure that Ko Ko Gyi’s concerns became a reality, as both he and Min Ko Naing found themselves behind bars once again in 2007. During his initial years of incarceration, Ko Ko Gyi had been held in prisons close enough to home for his friends and family to visit. But this time the Burmese authorities seem determinined to ensure that the student movement leaders are as out of sight and incommunicado as possible, sending them to separate remote prisons. There is a definite method to the junta’s madness. By isolating Ko Ko Gyi and limiting his contacts with colleagues, the regime has taken away one of the student leader’s main strengths. Fellow activists said he is at his best in political discussions among small groups, because while he speaks slowly and clearly with sound argument, his slightly tense and subdued constitution and appearance make him a less powerful public speaker than his captivating and inspirational counterpart, Min Ko Naing. In his own way, however, Ko Ko Gyi is a leader, as evidenced by his propensity to chart his own course rather than follow the crowd or conventional wisdom. For example, in contrast to many students who went into the jungles and took up arms against the regime

in the aftermath of the failed 1988 uprising, Ko Ko Gyi stuck to his strong belief in finding solutions to the country’s political deadlock by political means only. In addition, a US diplomatic cable from Rangoon leaked by Wikileaks late last year suggested that Ko Ko Gyi voiced his support among fellow political prisoners for opposition participation in the controversial 2010 elections, which Suu Kyi and the NLD boycotted. If it is true that Ko Ko Gyi supported the election and was somewhat optimistic about Burma’s postelection scenario, this may undercut his informal role as a main political strategist for the studentled opposition movement, because the regime has shown no inclination to open up the country to true democracy either before, during or after the election. But recently released political prisoners said that Ko Ko Gyi’s apparent support for the elections was quoted out of context. They said he only supported participation in polls on the pre-election conditions that political prisoners were released, a review of the 2008 Constitution took place and all political parties and their members were allowed to freely participate in the election. If Ko Ko Gyi had supported the 2010 elections without these conditions, it is unlikely the regime would be taking such pains to continue Ko Ko Gyi to keep him muzzled. The regime is clearly afraid that if the duo of Ko Ko Gyi and Min Ko Naing is released, they could team up with Suu Kyi to form a formidable opposition movement that could inspire future mass anti-government movements. In addition, given Suu Kyi’s advancing age, either could step into her role as national leader. “In light of their personal sacrifices and political history, there is every possibility that student leaders like Ko Ko Gyi would become the country’s national leaders,” said Tin Oo. Ko Ko Gyi once said: “A constitution should embody the dignity and political standards of a country and its citizens.... Flexibility and malleability are the keys.” For now, there is no sign in Burma’s post-election political landscape of the ruling generals becoming flexible or malleable. There is also no sign that Ko Ko Gyi will be released anytime soon. And that may be the best testimony of his value to the pro-democracy movement and his danger to the regime.  March 2011