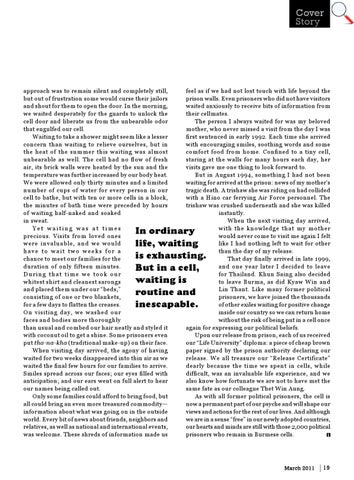 approach was to remain silent and completely still, but out of frustration some would curse their jailors and shout for them to open the door. In the morning, we waited desperately for the guards to unlock the cell door and liberate us from the unbearable odor that engulfed our cell. Waiting to take a shower might seem like a lesser concern than waiting to relieve ourselves, but in the heat of the summer this waiting was almost unbearable as well. The cell had no flow of fresh air, its brick walls were heated by the sun and the temperature was further increased by our body heat. We were allowed only thirty minutes and a limited number of cups of water for every person in our cell to bathe, but with ten or more cells in a block, the minutes of bath time were preceded by hours of waiting half-naked and soaked in sweat. Yet waiting was at times precious. Visits from loved ones were invaluable, and we would have to wait two weeks for a chance to meet our families for the duration of only fifteen minutes. During that time we took our whitest shirt and cleanest sarongs and placed them under our “beds,” consisting of one or two blankets, for a few days to flatten the creases. On visiting day, we washed our faces and bodies more thoroughly than usual and combed our hair neatly and styled it with coconut oil to get a shine. Some prisoners even put tha-na-kha (traditional make-up) on their face. When visiting day arrived, the agony of having waited for two weeks disappeared into thin air as we waited the final few hours for our families to arrive. Smiles spread across our faces; our eyes filled with anticipation; and our ears went on full alert to hear our names being called out. Only some families could afford to bring food, but all could bring an even more treasured commodity— information about what was going on in the outside world. Every bit of news about friends, neighbors and relatives, as well as national and international events, was welcome. These shreds of information made us

feel as if we had not lost touch with life beyond the prison walls. Even prisoners who did not have visitors waited anxiously to receive bits of information from their cellmates. The person I always waited for was my beloved mother, who never missed a visit from the day I was first sentenced in early 1992. Each time she arrived with encouraging smiles, soothing words and some comfort food from home. Confined to a tiny cell, staring at the walls for many hours each day, her visits gave me one thing to look forward to. But in August 1994, something I had not been waiting for arrived at the prison: news of my mother’s tragic death. A trishaw she was riding on had collided with a Hino car ferrying Air Force personnel. The trishaw was crushed underneath and she was killed instantly. When the next visiting day arrived, with the knowledge that my mother would never come to visit me again I felt like I had nothing left to wait for other than the day of my release. That day finally arrived in late 1999, and one year later I decided to leave for Thailand. Khun Saing also decided to leave Burma, as did Kyaw Win and Lin Thant. Like many former political prisoners, we have joined the thousands of other exiles waiting for positive change inside our country so we can return home without the risk of being put in a cell once again for expressing our political beliefs. Upon our release from prison, each of us received our “Life University” diploma: a piece of cheap brown paper signed by the prison authority declaring our release. We all treasure our “Release Certificate” dearly because the time we spent in cells, while difficult, was an invaluable life experience, and we also know how fortunate we are not to have met the same fate as our colleague Thet Win Aung. As with all former political prisoners, the cell is now a permanent part of our psyche and will shape our views and actions for the rest of our lives. And although we are in a sense “free” in our newly adopted countries, our hearts and minds are still with those 2,000 political prisoners who remain in Burmese cells.

In ordinary life, waiting is exhausting. But in a cell, waiting is routine and inescapable.