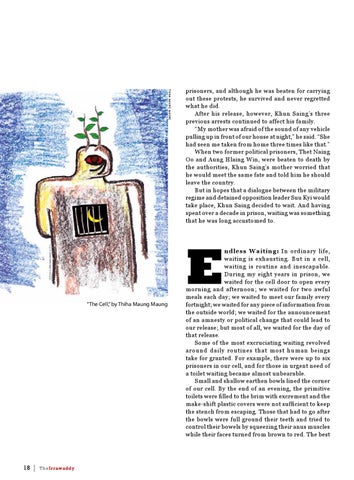 prisoners, and although he was beaten for carrying out these protests, he survived and never regretted what he did. After his release, however, Khun Saing’s three previous arrests continued to affect his family. “My mother was afraid of the sound of any vehicle pulling up in front of our house at night,” he said. “She had seen me taken from home three times like that.” When two former political prisoners, Thet Naing Oo and Aung Hlaing Win, were beaten to death by the authorities, Khun Saing’s mother worried that he would meet the same fate and told him he should leave the country. But in hopes that a dialogue between the military regime and detained opposition leader Suu Kyi would take place, Khun Saing decided to wait. And having spent over a decade in prison, waiting was something that he was long accustomed to.

ndless Waiting: In ordinary life, waiting is exhausting. But in a cell, waiting is routine and inescapable. During my eight years in prison, we waited for the cell door to open every morning and afternoon; we waited for two awful meals each day; we waited to meet our family every fortnight; we waited for any piece of information from the outside world; we waited for the announcement of an amnesty or political change that could lead to our release; but most of all, we waited for the day of that release. Some of the most excruciating waiting revolved around daily routines that most human beings take for granted. For example, there were up to six prisoners in our cell, and for those in urgent need of a toilet waiting became almost unbearable. Small and shallow earthen bowls lined the corner of our cell. By the end of an evening, the primitive toilets were filled to the brim with excrement and the make-shift plastic covers were not sufficient to keep the stench from escaping. Those that had to go after the bowls were full ground their teeth and tried to control their bowels by squeezing their anus muscles while their faces turned from brown to red. The best