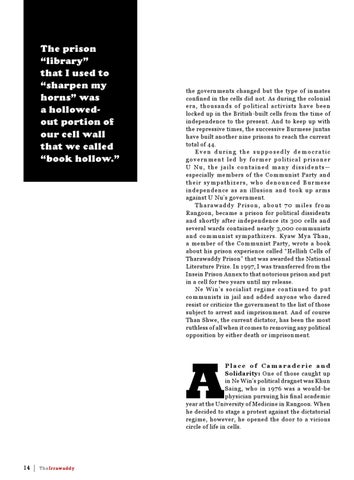 The prison “library” that I used to “sharpen my horns” was a hollowedout portion of our cell wall that we called “book hollow.”

the governments changed but the type of inmates confined in the cells did not. As during the colonial era, thousands of political activists have been locked up in the British-built cells from the time of independence to the present. And to keep up with the repressive times, the successive Burmese juntas have built another nine prisons to reach the current total of 44. Even during the supposedly democratic government led by former political prisoner U Nu, the jails contained many dissidents— especially members of the Communist Party and their sympathizers, who denounced Burmese independence as an illusion and took up arms against U Nu’s government. Tharawaddy Prison, about 70 miles from Rangoon, became a prison for political dissidents and shortly after independence its 300 cells and several wards contained nearly 3,000 communists and communist sympathizers. Kyaw Mya Than, a member of the Communist Party, wrote a book about his prison experience called “Hellish Cells of Tharawaddy Prison” that was awarded the National Literature Prize. In 1997, I was transferred from the Insein Prison Annex to that notorious prison and put in a cell for two years until my release. Ne Win’s socialist regime continued to put communists in jail and added anyone who dared resist or criticize the government to the list of those subject to arrest and imprisonment. And of course Than Shwe, the current dictator, has been the most ruthless of all when it comes to removing any political opposition by either death or imprisonment.

Place of Camaraderie and Solidarity: One of those caught up in Ne Win’s political dragnet was Khun Saing, who in 1976 was a would-be physician pursuing his final academic year at the University of Medicine in Rangoon. When he decided to stage a protest against the dictatorial regime, however, he opened the door to a vicious circle of life in cells.