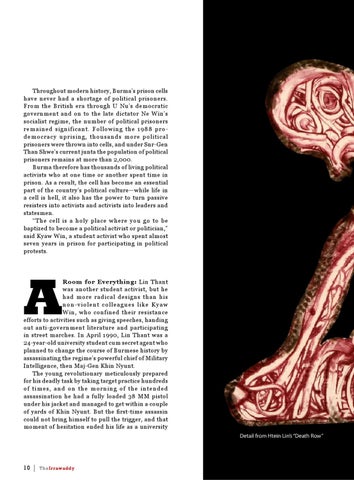 Throughout modern history, Burma’s prison cells have never had a shortage of political prisoners. From the British era through U Nu’s democratic government and on to the late dictator Ne Win’s socialist regime, the number of political prisoners remained significant. Following the 1988 prodemocracy uprising, thousands more political prisoners were thrown into cells, and under Snr-Gen Than Shwe’s current junta the population of political prisoners remains at more than 2,000. Burma therefore has thousands of living political activists who at one time or another spent time in prison. As a result, the cell has become an essential part of the country’s political culture—while life in a cell is hell, it also has the power to turn passive resisters into activists and activists into leaders and statesmen. “The cell is a holy place where you go to be baptized to become a political activist or politician,” said Kyaw Win, a student activist who spent almost seven years in prison for participating in political protests.

Room for Everything: Lin Thant was another student activist, but he had more radical designs than his non-violent colleagues like Kyaw Win, who confined their resistance efforts to activities such as giving speeches, handing out anti-government literature and participating in street marches. In April 1990, Lin Thant was a 24-year-old university student cum secret agent who planned to change the course of Burmese history by assassinating the regime’s powerful chief of Military Intelligence, then Maj-Gen Khin Nyunt. The young revolutionary meticulously prepared for his deadly task by taking target practice hundreds of times, and on the morning of the intended assassination he had a fully loaded 38 MM pistol under his jacket and managed to get within a couple of yards of Khin Nyunt. But the first-time assassin could not bring himself to pull the trigger, and that moment of hesitation ended his life as a university Detail from Htein Lin’s “Death Row”