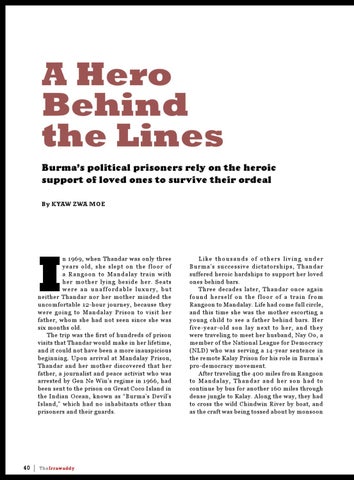 n 1969, when Thandar was only three years old, she slept on the floor of a Rangoon to Mandalay train with her mother lying beside her. Seats were an unaffordable luxury, but neither Thandar nor her mother minded the uncomfortable 12-hour journey, because they were going to Mandalay Prison to visit her father, whom she had not seen since she was six months old. The trip was the first of hundreds of prison visits that Thandar would make in her lifetime, and it could not have been a more inauspicious beginning. Upon arrival at Mandalay Prison, Thandar and her mother discovered that her father, a journalist and peace activist who was arrested by Gen Ne Win’s regime in 1966, had been sent to the prison on Great Coco Island in the Indian Ocean, known as “Burma’s Devil’s Island,” which had no inhabitants other than prisoners and their guards.

Like thousands of others living under Burma’s successive dictatorships, Thandar suffered heroic hardships to support her loved ones behind bars. Three decades later, Thandar once again found herself on the floor of a train from Rangoon to Mandalay. Life had come full circle, and this time she was the mother escorting a young child to see a father behind bars. Her five-year-old son lay next to her, and they were traveling to meet her husband, Nay Oo, a member of the National League for Democracy (NLD) who was serving a 14-year sentence in the remote Kalay Prison for his role in Burma’s pro-democracy movement. After traveling the 400 miles from Rangoon to Mandalay, Thandar and her son had to continue by bus for another 160 miles through dense jungle to Kalay. Along the way, they had to cross the wild Chindwin River by boat, and as the craft was being tossed about by monsoon 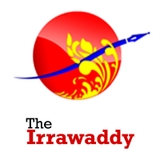