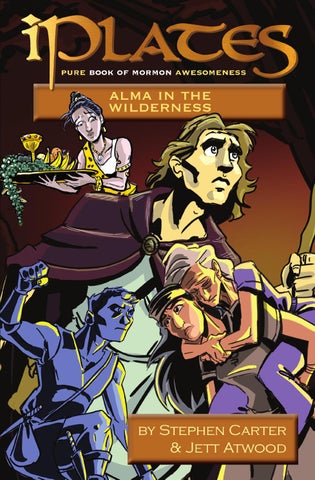 Alma in the Wilderness

Copyright 2014 Stephen Carter and Jett Atwood This is a special preview edition sold only at select 2014 events. All Rights Reserved. Except as permitted under the U.S. Copyright Act of 1976, no part of this publication may be reproduced, distributed, or transmitted in any form or by any means, or stored in a database or retrieval system, without the prior written permission of the authors. The scanning, uploading, and distribution of this book via the Internet or via any other means without the permission of the authors is illegal and punishable by law. Besides that, weâ&#x20AC;&#x2122;re poor, starving artists with families to feed. Thanks for buying the book. ISBN-13: 978-1497546493 ISBN-10: 1497546494

Dedicated to our Kickstarter backers, who made this book possible. Thank you! â&#x20AC;&#x201D;Stephen and Jett

To Get You Up to Speed

OR MANY YEARS, Alma was a priest in King Noah’s court. He helped Noah ascend to the throne and build a rich and powerful kingdom. With that power, the king and his priests began to live lives of excess and debauchery. They laid heavy taxes on the people to support their lifestyle. Along with the other priests, it was Alma’s job to speak flattering words to the people and persuade them to become wicked and prideful.

But then the prophet Abinadi was captured and brought to the palace where his teachings changed Alma’s heart. When King Noah decreed that Abinadi would be executed, Alma tried to protect the prophet, causing King Noah to order Alma’s death as well. Alma escaped into the wilderness where he wrote down Abinadi’s teachings and met Gideon, a revolutionary. Together, Alma and Gideon plan to take the city back from King Noah.

To get the whole story: read iPlates: Volume I. Available in print and on Kindle.

this is the just the beginning of the 128-page graphic novel of iplates: Volume II. The full volume will come out Fall 2014. Like us on Facebook or visit our website, iplates.net, for further details.

Want More? Vowing to reclaim the land of his fathers, Zeniff leads a company of Nephites deep into Lamanite territory.

Will his ambitious son Noah seize the crown?

Can the prophet Abinadi save the city from its own wickedness?

Adventure, war, betrayal, and redemption await you in iPlates Volume I, an award-winning comic series based on the Book of Mormon.

available from Amazon and on Kindle iPlates: Alma in the Wilderness

Once one of King Noah’s most influential priests, Alma had wielded great power. But then a lone prophet changed him forever. A price on hi...

iPlates: Alma in the Wilderness

Once one of King Noah’s most influential priests, Alma had wielded great power. But then a lone prophet changed him forever. A price on hi...