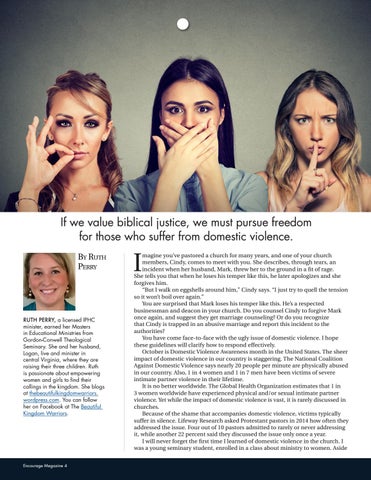 If we value biblical justice, we must pursue freedom for those who suffer from domestic violence. By Ruth Perry

RUTH PERRY, a licensed IPHC minister, earned her Masters in Educational Ministries from Gordon-Conwell Theological Seminary. She and her husband, Logan, live and minister in central Virginia, where they are raising their three children. Ruth is passionate about empowering women and girls to find their callings in the kingdom. She blogs at thebeautifulkingdomwarriors. wordpress.com. You can follow her on Facebook at The Beautiful Kingdom Warriors.

magine you’ve pastored a church for many years, and one of your church members, Cindy, comes to meet with you. She describes, through tears, an incident when her husband, Mark, threw her to the ground in a fit of rage. She tells you that when he loses his temper like this, he later apologizes and she forgives him. “But I walk on eggshells around him,” Cindy says. “I just try to quell the tension so it won’t boil over again.” You are surprised that Mark loses his temper like this. He’s a respected businessman and deacon in your church. Do you counsel Cindy to forgive Mark once again, and suggest they get marriage counseling? Or do you recognize that Cindy is trapped in an abusive marriage and report this incident to the authorities? You have come face-to-face with the ugly issue of domestic violence. I hope these guidelines will clarify how to respond effectively. October is Domestic Violence Awareness month in the United States. The sheer impact of domestic violence in our country is staggering. The National Coalition Against Domestic Violence says nearly 20 people per minute are physically abused in our country. Also, 1 in 4 women and 1 in 7 men have been victims of severe intimate partner violence in their lifetime. It is no better worldwide. The Global Health Organization estimates that 1 in 3 women worldwide have experienced physical and/or sexual intimate partner violence. Yet while the impact of domestic violence is vast, it is rarely discussed in churches. Because of the shame that accompanies domestic violence, victims typically suffer in silence. Lifeway Research asked Protestant pastors in 2014 how often they addressed the issue. Four out of 10 pastors admitted to rarely or never addressing it, while another 22 percent said they discussed the issue only once a year. I will never forget the first time I learned of domestic violence in the church. I was a young seminary student, enrolled in a class about ministry to women. Aside 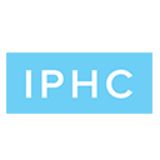