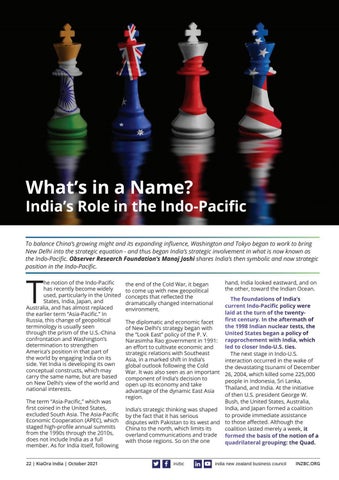 What’s in a Name?

he notion of the Indo-Pacific has recently become widely used, particularly in the United States, India, Japan, and Australia, and has almost replaced the earlier term “Asia-Pacific.” In Russia, this change of geopolitical terminology is usually seen through the prism of the U.S.-China confrontation and Washington’s determination to strengthen America’s position in that part of the world by engaging India on its side. Yet India is developing its own conceptual constructs, which may carry the same name, but are based on New Delhi’s view of the world and national interests. The term “Asia-Pacific,” which was first coined in the United States, excluded South Asia. The Asia-Pacific Economic Cooperation (APEC), which staged high-profile annual summits from the 1990s through the 2010s, does not include India as a full member. As for India itself, following

the end of the Cold War, it began to come up with new geopolitical concepts that reflected the dramatically changed international environment.

hand, India looked eastward, and on the other, toward the Indian Ocean.

The foundations of India’s current Indo-Pacific policy were laid at the turn of the twentyfirst century. In the aftermath of The diplomatic and economic facet the 1998 Indian nuclear tests, the of New Delhi’s strategy began with United States began a policy of the “Look East” policy of the P. V. Narasimha Rao government in 1991: rapprochement with India, which led to closer Indo-U.S. ties. an effort to cultivate economic and strategic relations with Southeast The next stage in Indo-U.S. Asia, in a marked shift in India’s interaction occurred in the wake of global outlook following the Cold the devastating tsunami of December War. It was also seen as an important 26, 2004, which killed some 225,000 component of India’s decision to people in Indonesia, Sri Lanka, open up its economy and take Thailand, and India. At the initiative advantage of the dynamic East Asia of then U.S. president George W. region. Bush, the United States, Australia, India’s strategic thinking was shaped India, and Japan formed a coalition to provide immediate assistance by the fact that it has serious disputes with Pakistan to its west and to those affected. Although the China to the north, which limits its coalition lasted merely a week, it overland communications and trade formed the basis of the notion of a with those regions. So on the one quadrilateral grouping: the Quad.

In this issue of the magazine, we explore the emerging technologies and industries that have, since the start of the pandemic, adapted and transformed. What's inside: - Exclusive interview of New Zealand Minister for Transport, Michael Wood - Peek into the future by Bhavish Aggarwal, Co-founder and CEO of OLA - Post COVID perspective by Amitabh Kant, CEO of NITI Aayog - Auckland University of Technology shares the value of international education - Invest India column that breaks down the new regulatory framework for drones in the country and many more stories. 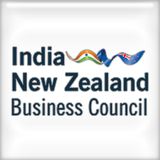