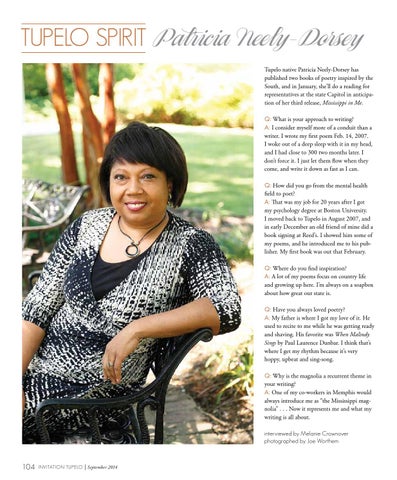 Tupelo native Patricia Neely-Dorsey has published two books of poetry inspired by the South, and in January, she’ll do a reading for representatives at the state Capitol in anticipation of her third release, Mississippi in Me.

Q: What is your approach to writing? A: I consider myself more of a conduit than a writer. I wrote my first poem Feb. 14, 2007. I woke out of a deep sleep with it in my head, and I had close to 300 two months later. I don’t force it. I just let them flow when they come, and write it down as fast as I can.

Q: How did you go from the mental health field to poet? A: That was my job for 20 years after I got my psychology degree at Boston University. I moved back to Tupelo in August 2007, and in early December an old friend of mine did a book signing at Reed’s. I showed him some of my poems, and he introduced me to his publisher. My first book was out that February.

Q: Where do you find inspiration? A: A lot of my poems focus on country life and growing up here. I’m always on a soapbox about how great our state is.

Q: Have you always loved poetry? A: My father is where I got my love of it. He used to recite to me while he was getting ready and shaving. His favorite was When Malindy Sings by Paul Laurence Dunbar. I think that’s where I get my rhythm because it’s very hoppy, upbeat and sing-song.

Q: Why is the magnolia a recurrent theme in your writing?

A: One of my co-workers in Memphis would always introduce me as “the Mississippi magnolia” . . . Now it represents me and what my writing is all about. interviewed by Melanie Crownover photographed by Joe Worthem 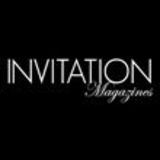