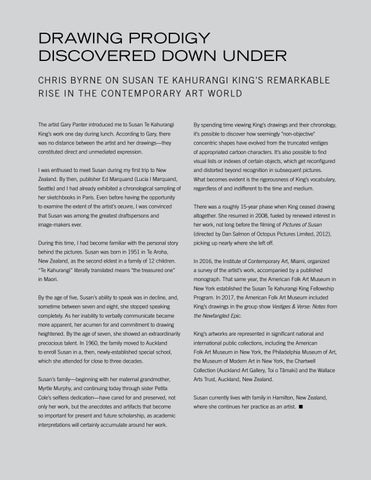 The artist Gary Panter introduced me to Susan Te Kahurangi

By spending time viewing King’s drawings and their chronology,

King’s work one day during lunch. According to Gary, there

was no distance between the artist and her drawings—they

concentric shapes have evolved from the truncated vestiges

of appropriated cartoon characters. It’s also possible to find visual lists or indexes of certain objects, which get reconfigured

and distorted beyond recognition in subsequent pictures.

What becomes evident is the rigorousness of King’s vocabulary,

Seattle) and I had already exhibited a chronological sampling of

regardless of and indifferent to the time and medium.

her sketchbooks in Paris. Even before having the opportunity to examine the extent of the artist’s oeuvre, I was convinced

There was a roughly 15-year phase when King ceased drawing

that Susan was among the greatest draftspersons and

altogether. She resumed in 2008, fueled by renewed interest in

her work, not long before the filming of Pictures of Susan (directed by Dan Salmon of Octopus Pictures Limited, 2012),

During this time, I had become familiar with the personal story

picking up nearly where she left off.

behind the pictures. Susan was born in 1951 in Te Aroha, New Zealand, as the second eldest in a family of 12 children.

In 2016, the Institute of Contemporary Art, Miami, organized

a survey of the artist’s work, accompanied by a published

By the age of five, Susan’s ability to speak was in decline, and,

sometime between seven and eight, she stopped speaking

completely. As her inability to verbally communicate became

more apparent, her acumen for and commitment to drawing heightened. By the age of seven, she showed an extraordinarily

King’s artworks are represented in significant national and

precocious talent. In 1960, the family moved to Auckland

international public collections, including the American

to enroll Susan in a, then, newly-established special school,

which she attended for close to three decades.

the Museum of Modern Art in New York, the Chartwell Collection (Auckland Art Gallery, Toi o Tãmaki) and the Wallace

Susan’s family—beginning with her maternal grandmother,

Myrtle Murphy, and continuing today through sister Petita Cole’s selfless dedication—have cared for and preserved, not

only her work, but the anecdotes and artifacts that become

where she continues her practice as an artist. ■

so important for present and future scholarship, as academic interpretations will certainly accumulate around her work.

This is volume 23 of the museum's annual publication, The Outsider. The Outsider provides in-depth coverage of exhibitions, programs and special events happening at Intuit as well as discoveries and news from the outsider and self-taught art genres. Published once a year, The Outsider has a worldwide readership. Starting in 2015, the magazine was made accessible to Intuit members and patrons in both digital and print form, allowing for a more widespread reception. Prior to Fall 1996, Vol. 1, Issue 1, The Outsider was published as In’tuit. An annual subscription is included with Intuit membership. 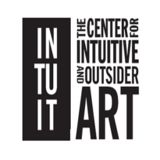