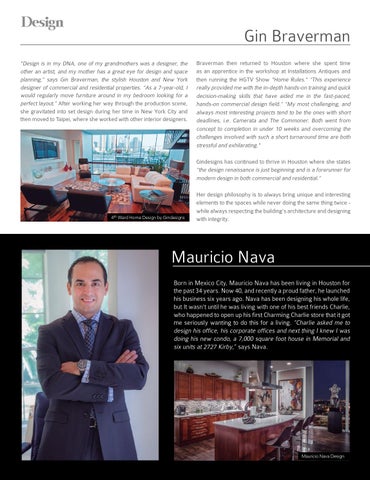 "Design is in my DNA, one of my grandmothers was a designer, the other an artist, and my mother has a great eye for design and space planning,” says Gin Braverman, the stylish Houston and New York designer of commercial and residential properties. “As a 7-year-old, I would regularly move furniture around in my bedroom looking for a perfect layout.” After working her way through the production scene, she gravitated into set design during her time in New York City and then moved to Taipei, where she worked with other interior designers.

Braverman then returned to Houston where she spent time as an apprentice in the workshop at Installations Antiques and then running the HGTV Show "Home Rules." “This experience really provided me with the in-depth hands-on training and quick decision-making skills that have aided me in the fast-paced, hands-on commercial design field.” “My most challenging, and always most interesting projects tend to be the ones with short deadlines, i.e. Camerata and The Commoner. Both went from concept to completion in under 10 weeks and overcoming the challenges involved with such a short turnaround time are both stressful and exhilarating." Gindesigns has continued to thrive in Houston where she states “the design renaissance is just beginning and is a forerunner for modern design in both commercial and residential.”

Her design philosophy is to always bring unique and interesting elements to the spaces while never doing the same thing twice while always respecting the building's architecture and designing with integrity.

Mauricio Nava Born in Mexico City, Mauricio Nava has been living in Houston for the past 34 years. Now 40, and recently a proud father, he launched his business six years ago. Nava has been designing his whole life, but It wasn't until he was living with one of his best friends Charlie, who happened to open up his first Charming Charlie store that it got me seriously wanting to do this for a living. “Charlie asked me to design his office, his corporate offices and next thing I knew I was doing his new condo, a 7,000 square foot house in Memorial and six units at 2727 Kirby,” says Nava. 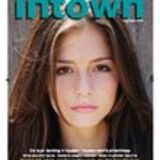