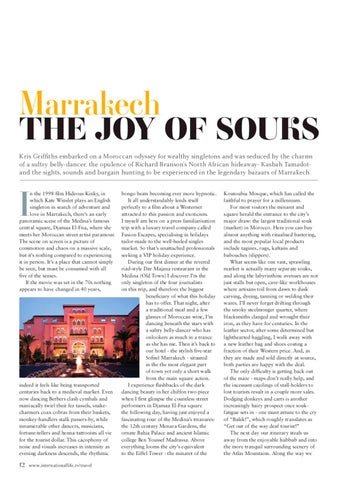 The Joy of Souks Kris Griffiths embarked on a Moroccan odyssey for wealthy singletons and was seduced by the charms of a sultry belly-dancer, the opulence of Richard Branson’s North African hideaway- Kasbah Tamadotand the sights, sounds and bargain hunting to be experienced in the legendary bazaars of Marrakech.

n the 1998 film Hideous Kinky, in which Kate Winslet plays an English singleton in search of adventure and love in Marrakech, there’s an early panoramic scene of the Medina’s famous central square, Djamaa El-Fna, where she meets her Moroccan street artist paramour. The scene on screen is a picture of commotion and chaos on a massive scale, but it’s nothing compared to experiencing it in person. It’s a place that cannot simply be seen, but must be consumed with all five of the senses. If the movie was set in the 70s nothing appears to have changed in 40 years,

indeed it feels like being transported centuries back to a medieval market. Even now dancing Berbers clash cymbals and maniacally twirl their fez tassels, snakecharmers coax cobras from their baskets, monkey-handlers stalk passers-by, while innumerable other dancers, musicians, fortune-tellers and henna-tattooists all vie for the tourist dollar. This cacophony of noise and visuals increases in intensity as evening darkness descends, the rhythmic

bongo beats becoming ever more hypnotic. It all understandably lends itself perfectly to a film about a Westerner attracted to this passion and exoticism. I myself am here on a press familiarisation trip with a luxury travel company called Fusion Escapes, specialising in holidays tailor-made to the well-heeled singles market. So that’s unattached professionals seeking a VIP holiday experience. During our first dinner at the revered riad-style Dar Majana restaurant in the Medina (Old Town) I discover I’m the only singleton of the four journalists on this trip, and therefore the biggest beneficiary of what this holiday has to offer. That night, after a traditional meal and a few glasses of Moroccan wine, I’m dancing beneath the stars with a sultry belly-dancer who has onlookers as much in a trance as she has me. Then it’s back to our hotel - the stylish five-star Sofitel Marrakech - situated in the the most elegant part of town yet only a short walk from the main square action. I experience flashbacks of the dark dancing beauty in her chiffon two-piece when I first glimpse the countless street performers in Djamaa El-Fna square the following day, having just enjoyed a fascinating tour of the Medina’s treasures: the 12th century Menara Gardens, the ornate Bahia Palace and ancient Islamic college Ben Youssef Madrassa. Above everything looms the city’s equivalent to the Eiffel Tower - the minaret of the

Koutoubia Mosque, which has called the faithful to prayer for a millennium. For most visitors the minaret and square herald the entrance to the city’s major draw: the largest traditional souk (market) in Morocco. Here you can buy almost anything with ritualised bartering, and the most popular local products include tagines, rugs, kaftans and babouches (slippers). What seems like one vast, sprawling market is actually many separate souks, and along the labyrinthine avenues are not just stalls but open, cave-like workhouses where artisans toil from dawn to dusk carving, dyeing, tanning or welding their wares. I’ll never forget drifting through the smoky steelmonger quarter, where blacksmiths clanged and wrought their iron, as they have for centuries. In the leather sector, after some determined but lighthearted haggling, I walk away with a new leather bag and shoes costing a fraction of their Western price. And, as they are made and sold directly at source, both parties are happy with the deal. The only difficulty is getting back out of the maze - maps don’t really help, and the incessant cajolings of stall-holders to lost tourists result in a couple more sales. Dodging donkeys and carts is another increasingly hairy prospect once soukfatigue sets in - one must attune to the cry of “Balek!’’, which roughly translates as “Get out of the way deaf tourist!’’ The next day our itinerary steals us away from the enjoyable hubbub and into the more tranquil surrounding scenery of the Atlas Mountains. Along the way we 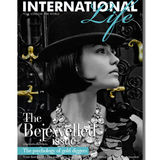