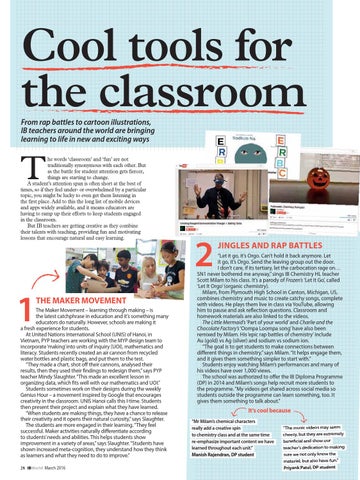 Cool tools for the classroom From rap battles to cartoon illustrations, IB teachers around the world are bringing learning to life in new and exciting ways

he words ‘classroom’ and ‘fun’ are not traditionally synonymous with each other. But as the battle for student attention gets ﬁercer, things are starting to change. A student’s attention span is often short at the best of times, so if they feel under- or overwhelmed by a particular topic, you might be lucky to even get them listening in the ﬁrst place. Add to this the long list of mobile devices and apps widely available, and it means educators are having to ramp up their efforts to keep students engaged in the classroom. But IB teachers are getting creative as they combine their talents with teaching, providing fun and motivating lessons that encourage natural and easy learning.

The Maker Movement – learning through making – is the latest catchphrase in education and it’s something many educators do naturally. However, schools are making it a fresh experience for students. At United Nations International School (UNIS) of Hanoi, in Vietnam, PYP teachers are working with the MYP design team to incorporate ‘making’ into units of inquiry (UOI), mathematics and literacy. Students recently created an air cannon from recycled water bottles and plastic bags, and put them to the test. “They made a chart, shot oﬀ their cannons, analysed their results, then they used their ﬁndings to redesign them,” says PYP teacher Mindy Slaughter. “This made an excellent lesson in organizing data, which ﬁts well with our mathematics and UOI.” Students sometimes work on their designs during the weekly Genius Hour – a movement inspired by Google that encourages creativity in the classroom. UNIS Hanoi calls this I-time. Students then present their project and explain what they have learned. “When students are making things, they have a chance to release their creativity and it opens their natural curiosity,” says Slaughter. The students are more engaged in their learning. “They feel successful. Maker activities naturally diﬀerentiate according to students’ needs and abilities. This helps students show improvement in a variety of areas,” says Slaughter. “Students have shown increased meta-cognition, they understand how they think as learners and what they need to do to improve.”

“Let it go, it’s Orgo. Can’t hold it back anymore. Let it go, it’s Orgo. Send the leaving group out the door. I don’t care, if its tertiary, let the carbocation rage on… SN1 never bothered me anyway,” sings IB Chemistry HL teacher Scott Milam to his class. It’s a parody of Frozen’s ‘Let It Go’, called ‘Let It Orgo’ (organic chemistry). Milam, from Plymouth High School in Canton, Michigan, US, combines chemistry and music to create catchy songs, complete with videos. He plays them live in class via YouTube, allowing him to pause and ask reﬂection questions. Classroom and homework materials are also linked to the videos. The Little Mermaid’s ‘Part of your world’ and Charlie and the Chocolate Factory’s ‘Oompa Loompa song’ have also been remixed by Milam. His ‘epic rap battles of chemistry’ include Au (gold) vs Ag (silver) and sodium vs sodium ion. “The goal is to get students to make connections between diﬀerent things in chemistry,” says Milam. “It helps engage them, and it gives them something simpler to start with.” Students enjoy watching Milam’s performances and many of his videos have over 1,000 views. The school was authorized to oﬀer the IB Diploma Programme (DP) in 2014 and Milam’s songs help recruit more students to the programme. “My videos get shared across social media so students outside the programme can learn something, too. It gives them something to talk about.”

It’s cool because “Mr Milam’s chemical characters really add a creative spin to chemistry class and at the same time re-emphasize important content we have learned throughout each unit.” Manish Rajendran, DP student

“The music videos may seem cheesy, but they are extremely beneﬁcial and show our teacher’s dedication to making sure we not only know the material, but also have fun.” Priyank Patel, DP student 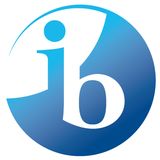