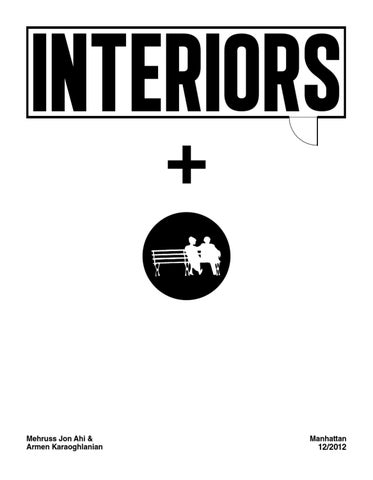 “Woody Allen, who is known for having his characters’ existential conversations spill into the streets, works here within a single space – his couch.”

Interiors: Issue 12 (12/2012) Film: Manhattan (1979) Director: Woody Allen The opening image of Manhattan (1979) is of the city during dawn in the early hours of the morning. The sequence is consists of images – buildings, bridges, and citizens – as we see the entire city over the course of a day until evening. Woody Allen paints a romanticized portrait of New York City with his film, a town that, for him, still exists in black and white. “That’s how I remember it from when I was small. I always heard Gershwin music with it, too.” In his love letter to the city, Isaac (Woody Allen) writes the opening chapter of his book as he describes his admiration for Manhattan. It’s difficult, however, for him to put his affection into words because it’s a beauty that cannot be described. Larry David has remarked that the feeling in New York City at the time of the film’s release was that Woody Allen had “made the Earth move” with his film. Woody Allen has stated that the film is “like a mixture of what I was trying to do with Annie Hall and Interiors.” It’s an earnest film from the filmmaker that brings together all of his strengths – both comedy and drama – resulting in a sincere picture. Woody Allen’s films are undoubtedly self-reflexive; he can assume any role he wants, his characters are often an extension of their author. Isaac, like Alvy in Annie Hall (1977), is a reflection of Woody Allen. The filmmaker’s personality comes through his characters and offers us a look inside his life. The diagram we have presented looks at the scene in which Isaac (or more accurately, Woody Allen) ponders one of life’s most difficult questions. The filmmaker, who was in psychoanalysis for 37 years until the time he began his relationship with his now-wife Soon-Yi Previn, is appropriately spread across the couch in his living room. Isaac speaks into a tape recorder and tosses around ideas for a

short story that concern people in Manhattan who are “constantly creating real unnecessary, neurotic problems for themselves in an effort to take their mind off the more unsolvable terrifying problems about the universe.” In remaining optimistic, Isaac poses the bigger question, “Why is life worth living?” Isaac’s positioning on the couch is indicative of his years in therapy and is also a reference to the fact that speaking out his thoughts, even into a tape recorder, is therapeutic. Woody Allen, who is known for having his characters’ existential conversations spill into the streets, works here within a single space – his couch. The scene itself consists of a static camera that only moves at the end when Isaac stands up. It’s within this single space that he addresses some of the most intimate questions about life as he thinks about the things that make life worthwhile. Woody Allen asks himself: “Why is life worth living? It&#39;s a very good question. There are certain things, I guess, that make it worthwhile.” The list that he names is as follows: Groucho Marx, Willie Mays, Wolfgang Mozart’s second movement of the Jupiter Symphony (Symphony No. 41), Louis Armstrong’s recording of “Potato Head Blues,” Swedish movies, Gustave Flaubert’s Sentimental Education, Marlon Brando, Frank Sinatra, Still Life with Apples and Pears by Paul Cézanne, the crabs at Sam Wo’s and Tracy’s face. In place of generalizations (family, career goals, dreams), Woody Allen cites specifics (comedian, baseball player, French novel, painting). It’s interesting to note, however, that Isaac (who has a son in the film with Jill (Meryl Streep) makes no mention of his child while compiling his list of things that make life worth living. Woody Allen, at the time of this film, didn’t have children himself and failed to realize the importance of children in a parent’s life. The filmmaker received a letter from a woman, pointing this out to him. “There were never children in my films. I didn&#39;t care about children. I mean, I didn&#39;t dislike them but I just had no thoughts about

children. I figured, so, I didn’t mention my child, so what? I mentioned things that were meaningful.” The filmmaker claims that after he had children, he “realized what an egregious blunder that was.” In addition, he has mentioned “children have become very, very meaningful to me, because they add an amazing dimension to your life.” This further emphasizes the self-reflexive nature of Woody Allen’s works. Woody Allen’s answer to the grand question of “Why is life worth living?” isn’t profound; instead of searching for deeper meaning, as we would expect from the filmmaker, he simply points out the things that make life meaningful. In addition, Woody Allen is highlighting the potential of art; that is, for him, these various art forms (music, cinema, literature) can provide a sense of worth in our lives. If life is otherwise empty and meaningless, if death is our only guarantee, it’s through the transformative power of art that we can add meaning into our lives. In other words, all we can hang onto in life are those things that move us and make us feel human emotions. In some sense, this in and of itself is the reason that Woody Allen makes films. It’s also the same excuse he creates for the characters in his short story, when he points out that they are “constantly creating real unnecessary, neurotic problems for themselves in an effort to take their mind off the more unsolvable terrifying problems about the universe.” In making films, Woody Allen keeps finding a way of distracting himself from the harsh realities of life. In working and creating, he is providing himself with a distraction from the hopeless emptiness of life. It’s through these distractions and delusions that he can carry on in life. It’s in this scene, at this point in the film, on his couch, where Isaac discovers the true beauty and sweetness of life. Isaac becomes fully aware of his feelings for Tracy (Mariel Hemingway) while listing the things that make life worth living. In an earlier scene in the film, Tracy had given Isaac a harmonica

as a gift, and he had responded by breaking up with her because he claimed he loved someone else. It’s only after this exercise that he rediscovers the harmonica in his drawer and finally realizes her importance. The film’s City Lights-esque ending with its over-the-shoulder shots of Isaac and Tracy emphasize that although Isaac knows Tracy will leave him, and even though he is responsible for her newfound independence, he finally comes to trust her. Tracy’s impact in Isaac’s life extends beyond a relationship; she has forever changed him. Isaac now understands and appreciates the things that he might have disregarded in the past. INT