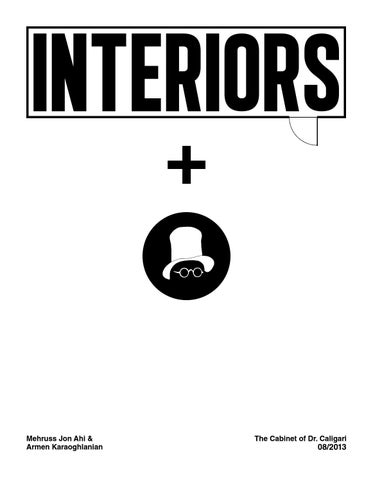 The Cabinet of Dr. Caligari

Page Collaboration by Dave Banks Dave Banks is originally from New England and currently works, creates and lives in Portland, Oregon. Dave Banks&#39; work places its focus on graphic radness, illustration, typography and art direction. His work can be seen at www.venomthunder.com.

&quot;The Cabinet of Dr. Caligari makes use of expressionist architecture and expresses interior reality through exterior means with its use of extreme distortion in its production design.&quot;

Interiors: Issue 20 (08/2013) Film: The Cabinet of Dr. Caligari (1920) Director: Robert Wiene The expressionistic techniques of German cinema were determined by their historical time period. Expressionism had originated in painting and theater, but had made its way into cinema during the 1920s and 1930s, as a reaction against realism. This was a direct reaction to the aftermath of World War I. The excessive visual style of these films were an escape or break from reality. In many instances, we can see how, in these films, reality has lost its basis. The stylistic techniques and formal qualities of German Expressionism films include the exploration of themes of paranoia, fear, and schizophrenia through mise-enscène, cinematography and lighting. F. W. Murnau’s Nosferatu (1922) and The Last Laugh (1924) and Fritz Lang’s M (1931) are films whose worlds are consumed with fear and corruption. The German Expressionism films of this time period were characterized by their expressive approach in externalizing human emotion and desire. These films conveyed inner, subjective emotions and experiences through external, objective means. These emotions were visually translated onto the screen using deliberately exaggerated sets and dramatic lighting, emphasizing the fear and horror that encapsulated the narrative.

These films focus on a reality that has been invaded and plagued by the irrational and cynical thoughts of its characters, and consequently, the sets in these films resemble their distress. These films make use of studio sets rather than actual locations, with distorted buildings painted on canvas backdrops in a

theatrical manner. Robert Wiene’s The Cabinet of Dr. Caligari (1920) begins with Francis (Friedrich Fehér) recounting a horrific event. In his story, he discusses Dr. Caligari (Werner Krauss), a man that exhibits a somnambulist, Cesare (Conrad Veidt), whom the doctor stores in a coffin-like cabinet and controls hypnotically. Francis recalls the death of his close friend, Alan (Hans Heinrich von Twardowski) and believes Cesare murdered him under Dr. Caligari’s control. The Cabinet of Dr. Caligari makes use of expressionist architecture and expresses interior reality through exterior means with its use of extreme distortion in its production design. The film, as a result, presents us with a dark and twisted world with distorted shapes and angles. This expressive style presents us with a grotesque worldview – buildings are slanted, doors and windows are unusually shaped and walls and floors consist of schizophrenic patterns and designs. The hallways, intersections, and buildings in the film are all artificial and unnatural. In addition to the design of the sets, the excessive stylization also extends to the intertitles of the film. The texture, underscoring of certain words and phrases, and lettering emphasize a schizophrenic state of mind.

The Cabinet of Dr. Caligari further confines its audience in a claustrophobic setting through its use of lighting. The surrounding space of a subject’s face in close-up is often darkened. This is seen with Cesare’s introduction – his gruesome appearance is emphasized because the frame is made up of just his face. The murder of Alan also uses harsh shadows and low-key lighting as a way of heightening the drama and spatially disorienting the audience. The audience never sees the actual murder – instead, we focus on a nearby wall on the shadows that wrestle for their lives.

The space we analyzed in our diagram is the most private of spaces, Dr. Caligari’s house, in a scene where Francis and the doctor visit his house and demand that he wakes Cesare up. Dr. Caligari’s house becomes a significant focal point throughout the film. This is his private dwelling, a space where he distances himself from society, and where he keeps Cesare hidden in a coffin. In our research, we noticed that the interior and exterior shots of his house don’t match. The width of the house from the exterior appears no more than six feet in length, while the interior space appears slightly wider in size.

The shape and form of Dr. Caligari’s house essentially communicates the perverse nature of his being. The house is unusually small in size and is nothing more than a single room. The interior space consists of painted lines, as well as harsh lighting from a lamp, which matches these sharp angles on the floor and walls. The diagram highlights these lines and shadows and emphasizes how much more claustrophobic the interior space feels because of them. Dr. Caligari’s only means to the outside world is a warped window. The window’s distorted shape, its twisted and deformed frame, essentially conveys Dr. Caligari’s point-of-view of the outside world. This space, however, as we later learn, isn’t an actual, physical space that exists within the story. The final scene of the film reveals that Dr. Caligari isn’t a murder, but rather a doctor in an asylum where Francis is a patient. The narrative of the film, therefore, is an extension of Francis’ fantasies. This suggests that Dr. Caligari’s house is a subconscious, imagined space created in Francis’ mind. The sharp patterns on the floors – mainly in the asylum at the end of the film –

are an indication of the fractured narrative storylines in the film. Francis stands at the center of these lines in the asylum, which are reflective of the various strands of his fantasies. The schizophrenic patterns on the floors, which are sharp and lead to various doors in the background, suggest the various perspectives that exist within the story.

The Cabinet of Dr. Caligari presents us with a subjective narrative from an unreliable narrator. Francis has become alienated from reality and escapes the truth and the burden of his guilt as he slips into his fantasies. The final scene of the film isn’t as stylized as the rest of the film. The buildings are no longer sloping, doors, windows and building arches are evenly shaped, and even the chairs at the right of the frame are realistic. This presents us with the notion that the surreal nature of the rest of the film and its excessive style is more than a aesthetic choice. It’s an essential element of the narrative of the film that captures the subjective mind of its protagonist and his schizophrenic personality. INT