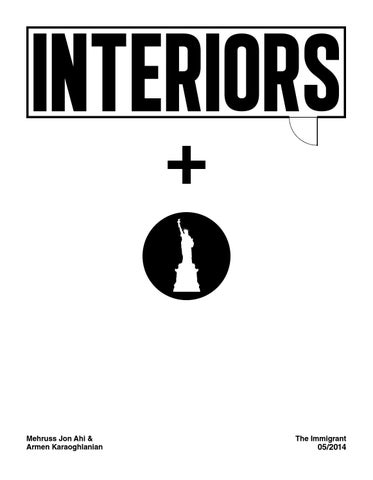 &quot;The Immigrant uses locations, space and distance as a way of commenting on Ewaâ&amp;#x20AC;&amp;#x2122;s difficulties.&quot;

Interiors: Issue 29 (05/2014) Film: The Immigrant (2013) Director: James Gray James Gray’s The Immigrant (2014), much like Francis Ford Coppola’s The Godfather (1972), opens with a massive set piece. The Godfather opens with the Corleone wedding on Don Corleone (Marlon Brando) inside his office. This scene features an outdoor wedding reception filled with hundreds of extras. The Immigrant opens on Ellis Island with a shot of the back of the Statue of Liberty as Bruno (Joaquin Phoenix) looks on. This scene, which also features hundreds of extras, takes place in the Registry Room as immigrants wait for their entrance into the United States. In both films, much of the action later takes place within rooms and private, intimate spaces.

The Immigrant is both epic and intimate in terms of its scope. The film covers a very specific time period in the history of the United States through the character of Ewa (Marion Cotillard). The film, which was partly filmed on location on Ellis Island, also makes use of various locations around New York, including Central Park, Brooklyn and the Lower East Side (which was recreated in the Bronx). James Gray uses CGI and visual effects quite effectively here, as he recreates a part of the New York cityscape that no longer exists. The Immigrant is composed of closeups of Ewa’s face. James Gray, who has likened Marion Cotillard to that of a silent film actress, because of her expressive face, uses close-ups as a way of drawing the audience closer to the character. The Immigrant is very much Ewa’s story. Ewa struggles in the United

States and attempts to free her sister, who is incarcerated in a hospital on Ellis Island. In the course of the film, as Ewa adjusts into an American lifestyle, we are constantly reminded of her distance from Ellis Island and her sister. In later moments in the film, when Ewa is faced with opportunities of leaving New York for California, she refuses, because of her sister. The Immigrant uses locations, space and distance as a way of commenting on Ewa’s difficulties. In this sense, Ewa is pinned down and confined.

This is also represented through her living situation with Bruno. Bruno offers Ewa a home, but entraps her after she starts working for him. Bruno’s apartment space therefore becomes a conflicting space for Ewa. If she leaves, she can no longer survive. If she stays, she further degrades herself. It’s because of this that we examined Bruno’s apartment space for our diagram. The scene that we focused on takes place in the hallway outside of his apartment. This space is shown throughout the film as Bruno and Ewa enter their home, but it’s also notable because it’s one of the first instances in the film where Bruno, Ewa and Orlando (Jeremy Renner) are all in the same space and on camera together. This ultimately becomes the location where Bruno murders Orlando, as if suggesting that these characters are incapable of coexisting. In this scene, after Bruno shoots and kills Orlando, James Gray cuts above the action in an overhead camera angle that points directly down onto them. This dynamic camera angle offers us a plan view of the characters.

The Immigrant effectively uses locations and distance as a way of commenting on failed dreams. Ewa leaves her home country in hopes for a better life, but once in the United States, the harsh realities of everyday life prove very different for her. In the final shot of the film, Ewa departs from Bruno and New York itself. Ewa escapes the confinement of this space and finally breaks free. INT