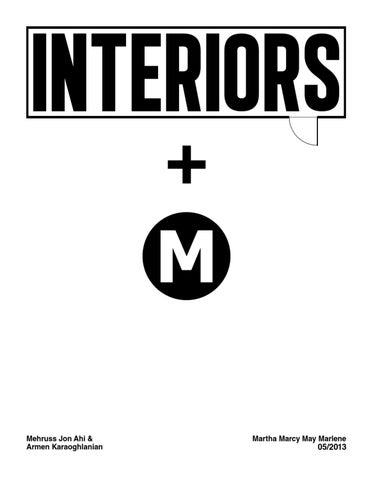 Interview with Sean Durkin Sean Durkin&#39;s directorial debut Martha Marcy May Marlene (2011) screened at the Sundance Film Festival and the Festival de Cannes in 2011. Sean Durkin is the writer and director of the film.

&quot;In presenting us with two different locations, the audience constantly reassess their place in the film, closely observing the surrounding space and setting of each scene.&quot;

Interiors: Issue 17 (05/2013) Film: Martha Marcy May Marlene (2011) Director: Sean Durkin Martha Marcy May Marlene (2011) makes extensive use of two locations – a farmhouse, where Martha (Elizabeth Olsen) lives before running away, and a lake house, where she stays with her sister Lucy (Sarah Paulson) and her sister’s husband Ted (Hugh Dancy). In an exclusive interview with Interiors, writer and director Sean Durkin spoke about the use of space and the function of these locations in his directorial debut film. Sean Durkin describes the farmhouse and the lake house as “opposite spaces.” The production used actual locations for the film. The farmhouse, which belongs to the filmmaker’s producing partner, Antonio Campos, is located in the Catskill Mountains. This was a location he had in mind for years while writing the film. The lake house, however, was discovered after Josh Mond, another one of his producers, explored the area and went on a “treasure hunt” looking for locations. They are both sparse in their design, but the farmhouse is “very lived in, warm, very sound.” In speaking of the space itself, he states, “I had this idea, just this backstory, that this was someone’s house that they had inherited and had been left sort of untouched for years and they inhabited it, and so it’s much dirtier.” In addition, he notes, “even though there’s a darkness and a dirtiness to the farmhouse, there’s something about it that’s got more comfort.”

There is no clear sense of time in the farmhouse. There are no clocks or calendars in this space. “There’s no past, there’s no future, there’s only the present and there’s no time,

and that basically becomes the state of mind for Martha’s point of view. That’s why I never thought of them as flashbacks. I just thought of them from Martha’s point of view that it’s all just happening at the same time.” Martha, as a result, is disoriented when she runs away. In a later scene, she asks Lucy how far she is from where she was picked up. Martha has no sense of geographic location. This provides us with a broader understanding of how space is used for the characters. In addition to the locations, we learn about the lack of information Martha has about her physical whereabouts. The lake house, by contrast, is spacious. “I wanted the lake house to be very open as well. It’s primarily one open space with big windows looking out onto the lake and I thought that should be a big contrast from the interior spaces of the farmhouse which were very much darker.” There are no private spaces in the lake houses – no hiding room for Martha, who feels more uncomfortable and out of place with her own family. p y

Martha asks her sister, “Why is the house so big?” Lucy replies that they like entertaining guests and having friends over, stating, “It’s just nice to have space.” Martha cannot comprehend space, or rather, excess space. It’s unusual for her that Ted and Lucy have another house in the city and use the lake house for weekends and holidays. Martha also asks if anyone else lives at the house; after having lived with numerous men and women at the farmhouse, it’s unusual for her that just two people would live in such a big house. In using actual locations rather than building sets, Sean Durkin explains that the crew would discover the best use of the space after arriving to the location. “There were

elements of the script in the lake house that we just had to cut out entirely because it just didn&#39;t work for the space… and it ended up being stuff that we didn&#39;t need in the end, but I think that oftentimes you have to adapt to a location and it gives you restrictions that make you more creative.” In addition to the fact that the farmhouse and the lake house are both used as locations that oftentimes feel like the same space, Sean Durkin comments on the houses that are broken into, which resemble the lake house. The fact that these houses can be mistaken for the lake house was an important decision for the filmmakers. It’s another instance of locations and spaces being indistinguishable from one another.

It’s also interesting to note that food plays a significant role in the first introduction of both spaces. In the farmhouse, the men sit and eat together. The women then take their turn after the men leave the table. In the lake house, when Martha has breakfast with Ted and Lucy, she picks her food and scarcely eats. In speaking about the use of food in the film, Sean Durkin jokes, “I like food…” before revealing that the decision came from when he was defining their world. “The eating habits of living on the farm were very strict – one meal a day – and if you look at the table, the women eat less than the men. In my research, it’s one of the first things that was consistent.” It’s a way of mind control through restricting their diets. Martha later attempts to adjust to a regular life, but isn’t used to eating breakfast in the morning. It’s also uncomfortable for her to be at the table with her sister and her sister’s husband. The film, with its careful cuts and transitions, takes us back and forth between

the farmhouse and the lake house. These key transitions and spatial jumps were written into the screenplay, while others were discovered while filming and editing. “I knew that I wanted to jump between the spaces and just be able to sometimes have an immediate stark clear spatial jump.” This became an integral part of the screenplay for the filmmaker, who used locations and space as a guideline for his film. In presenting us with two different locations – a dark, dirty farmhouse and a modern, pristine lake house – and cutting between these spaces through match cuts, the audience constantly reassess their place in the film, closely observing the surrounding space and setting of each scene. The filmmaker, as a result, bridges together these locations. These cuts often happen in dark spaces, where we can’t place ourselves, until enough information reveals the location. In a similar manner, Martha herself becomes disoriented and, as audience members, it’s a challenge to differentiate between the two spaces as we reassess whether what’s taking place on screen is happening in the present or the past. Sean Durkin notes that this was “the biggest element of the use of space in the film” and remarks that “even though the spaces were so different, I wanted to find a way to connect them in her mind.”

Sean Durkin notes, “I think one of my favorite moments in the film and in terms of space and using location, and this is why I wanted the lake house to be very wide open and feel very spacious and connected, so there wasn’t a lot of places to hide, is the scene where she’s in Ted and Lucy’s bed, and they’re on the couch in the living room talking about her.” In the diagram we have presented, we analyzed this specific instance. In this scene, we see Martha’s face through a door. The

camera pushes in on her face as we cut to the living room where Ted and Lucy talk about Martha. The use of space in this scene is noteworthy because, while we’re on Martha, the audio is separate from the camera and in another room. In our diagram, we have included a camera icon, which indicates what is being shown on screen, as well as a sound icon, which indicates what is being heard. “It’s a very simple scene. It’s just two reverse shots through a door, essentially, and I just wanted to create that space where the whole house was open in length and I just loved the idea of people talking about people in another room. It’s sort of that simple and how alienating that is to her. It’s supposed to be a very safe place but she can’t find that safety in there.”

Sean Durkin also discusses his use of space from another scene from the film, where Patrick serenades Martha. The shots are constructed in a simple manner. The camera moves in on Patrick as he sings with a reverse shot of Martha listening. Sean Durkin explains that the key moment in this scene is Zoe (Louisa Krause), who is framed on the edge. Sean Durkin explains that “you almost don&#39;t notice her, but she is in love and enamored from the get go.” This is an instance that shows his use of space within the frame; as Martha falls in love with Patrick, we see how far Zoe’s character has taken that same attraction. It’s a subtle moment that involves performances. “I’m just interested in studying their faces, studying their reactions, and letting them be in a situation and watching them. I’m usually more interested in watching a reaction than I am of watching what someone has to say.”

Martha Marcy May Marlene uses space resourcefully, both within the frame itself, as seen when Martha and Zoe both fantasize about Patrick, as well as outside of the frame, in using locations that become indistinguishable in the character’s mind.INT