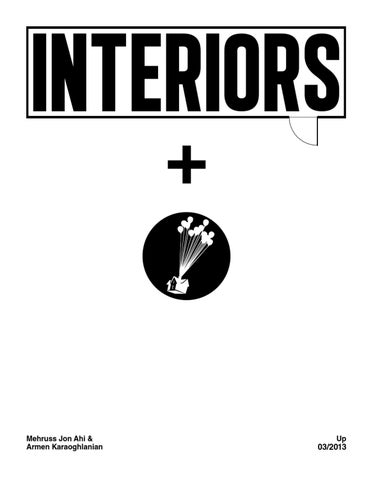 Page Collaboration by Daniel Patrick Helmstetter Daniel Patrick Helmstetter is an artist who works with words. For the sake of easy definition, he is a poet with a paintbrush. He has published, installed, exhibited, and written his words through out the US and Mexico. His work can be seen at www.danielpatrick.org. Interview with Patrick Lin Patrick Lin joined Pixar in 1997 and has worked on numerous films for the studio, including A Bug&#39;s Life (1998), Monster&#39;s Inc. (2001) and Ratatouille (2007). Patrick Lin is the director of photography - camera for Up (2009).

â&amp;#x20AC;&amp;#x153;In the montage sequence, Carl and Ellie always appear in the frame together, emphasizing their closeness.â&amp;#x20AC;?

Interiors: Issue 15 (03/2013) Film: Up (2009) Director: Pete Docter The visual language of Pete Docter’s Up (2009), Pixar’s first animated film produced and released in 3D, is concerned with repetition – constructing specific images and later repeating them as visual cues. The film’s four-minute montage sequence, which we analyzed and diagrammed for our issue, consists of images of Carl and Ellie – shots that are carefully composed and constructed, which are later repeated after the wife’s passing as a way of reminding audiences of her absence. In an exclusive interview with Interiors, Patrick Lin, director of photography - camera of Up, explains the role of the director of photography in an animated film. The role, which is divided into camera and lighting, differs in an animated film, because unlike a live action production, where the sequential order for a production is “lights, camera and action,” in an animated film, the order becomes “camera, action and lights.” The cinematographer states “camera and lights are at the opposite ends of the production pipeline so it make senses to separate the discipline.” In addition, he explains that artistically, there is no difference between a cinematographer on a live action film and an animated film. The job of the cinematographer is always using camera and lighting as a way of supporting the story and characters. The only difference is that in animated films, cinematographers have complete control over all details, further stressing the importance of visual clues and details in the images that they construct and create onscreen. Patrick Lin points out that, in essence, Up is made of squares and circles. “The visual motif for Carl is a square shape,” he explains. The house is designed as a square because “having a long house would ruin the silhouette of a flying house.” The film, as a result, consists of various visual metaphors –

including the notion that the protagonist attaches balloons onto his house and flies to the skies, visualizing his desire for reuniting with his deceased wife. The house is the centerpiece of the film. The uniqueness of its architecture, coupled with the fact that husband and wife built the house together, results in the house in the film becoming a character in itself. It’s interesting to note that the house was actually reproduced in Utah by Blair Bangerter of Bangerter Homes. The 2,800 square foot was designed after careful examination of the interior spaces of the home in the film. The close investigation of interior space, a task that is familiar for our team in our research stages, is brought up in Brooks Barnes’ piece for the New York Times. The author speaks of “architectural compromise” when transforming an animated house into an actual, physical space. In the film, the chimney rises from the center of the house, which doesn’t match with the location of the fireplace inside the house. This detail isn’t a continuity error. The filmmakers altered its location for ideal placement of the balloons from the exterior of the house. Blair Bangerter eventually created a chimney that remained true to the film and constructed a side vent for the fireplace, matching the film as closely as possible. Patrick Lin, however, pointed out in his interview that “one big secret of the house is that the interior does not fit into the exterior.” The filmmakers instead cheated space. “The interior is actually about twice as long,” he explains, pointing out that only the living room fit into the exterior and that there was never a second floor either. The stairs lead to nowhere and the bedroom is a separate set. Patrick Lin states, however, “with careful composition, I don’t think the audience ever questions it.” In an animated film, a director of photography works in a fully 3D environment and treats their 3D camera and sets as if they are physical cameras and locations. Their work consists of extensive location scouting; “stage lines, screen directions and how to

choreograph and move our characters through a scene is something that we do everyday,” remarks Patrick Lin. This further emphasizes how space is always a concern for filmmakers, in both animated films and live action films. The montage begins with Carl and Ellie’s wedding. Their individual families occupy two opposite sides of the church. Ellie’s family is loud and is dressed in color. Carl’s family is expressionless and is dressed in blacks and greys. In a specific moment in this sequence, Ellie is placed in the foreground, as she saws, while Carl is placed in the background, as he hammers. In a later moment in this sequence, Ellie paints a mural, while Carl fixes the mobile for their baby’s room. In both instances, Carl and Ellie are working together on their house. In instances such as these, the filmmakers focus on them together in a wide shot, instead of focusing on their individual work. In the montage sequence, Carl and Ellie always appear in the frame together, emphasizing their closeness. There are two instances in this sequence where we transition from one location into another. The first comes when we pan from the baby’s room into a hospital room, going from brightness to darkness, both metaphorically and literally. Carl and Ellie still occupy the frame together in the hospital room, emphasizing their closeness during their hardest times. The second instance is the last shot of the montage sequence; Carl stands up during in the church and we cross dissolve to his house. The sequence, which spans a few decades, becomes a summary of their married life. The use of color and lighting also informs its mood. The early years in the montage consist of sepia-toned images that result in a vintage look, whereas their later years consist of more richer, brighter colors, such as blues and greens. The diagram we have presented focuses on three specific moments in this sequence, all of which are concerned with time and space. The repetition of images in this sequence begins creating a bond between Carl and Ellie. Patrick Lin explains, “The shot design of the montage sequence is mainly slow lateral drifts and push-ins. The idea is for the audience to feel that time is passing, in a steady and mundane way.” These recurring shots echo Carl and Ellie’s life together.

The first callout symbol in our diagram focuses on the exact moment when Carl and Ellie hold hands in their chairs. This moment is later referenced at the top of Paradise Falls when Carl stumbles upon Ellie’s book. Carl and Ellie hold hands in a wide shot, with both in frame. Carl later finds Ellie’s book and sees a picture of them sitting and reading together. The following shot is of Carl sitting alone. The framing and composition of this image are the same as from earlier. Patrick Lin explains “our goal was to bring the audience back to the montage sequence,” as Carl remembers his life together with Ellie. The shot that follows afterward is a high-angle shot of Carl sitting alone, highlighting the vastness of the space and emphasizing Ellie’s absence.

In this sequence, Ellie repeatedly fixes Carl’s tie. The second callout symbol in our diagram points at the last instance where she fixes his tie. It’s a significant moment because the filmmakers jump ahead decades through time in a matter of shots. It’s a moment where we remain in the same space as time skips ahead. The third callout symbol in our diagram focuses on the movement of the savings jar over time, from the side table in their living room into a corner of a dusty shelf. There is a line drawn on our diagram that signifies its change of location. This instance is significant because the movement of the jar happens gradually in their lives. In a specific shot of the film, we see the jar in the distance. The savings jar, which was once the center of their lives, is eventually tossed aside, hinting at the fact that other priorities have come up in their lives. INT