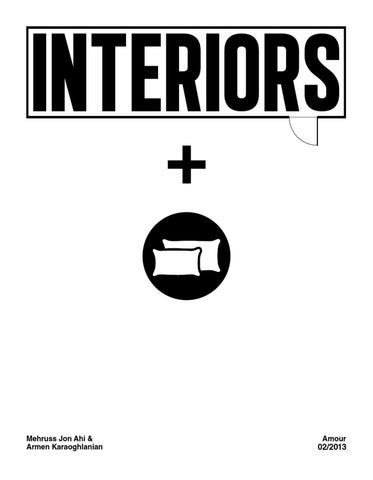 â&#x20AC;&#x153;In lieu of shooting on actual locations, Michael Haneke recreated an entire location according to his specifications to create the space he desired for his film.â&#x20AC;?

Interiors: Issue 14 (02/2013) Film: Amour (2012) Director: Michael Haneke Michael Haneke, known for his cold, disturbing and bleak films, such as The Funny Games (1997), Caché (2005) and The White Ribbon (2009), goes for a little compassion with Amour (2012). The film, which explores the private life of a married couple, Georges (Jean-Louis Trintignant) and Anne (Emmanuelle Riva), is a meditation on how individuals cope with the loss of a loved one. The filmmaker has emphasized that the subject matter of this film isn’t based on actual events. Tom Shone of Vulture, however, notes that the filmmaker’s 92-year-old aunt, who suffered from rheumatism, asked for his assistance when she contemplated suicide. The filmmaker refused and she criticized him after she awoke in the hospital after an unsuccessful suicide attempt; she was successful in her suicide two years later. Michael Haneke sets his film within a single location, a Parisian apartment, which was constructed in a soundstage. The filmmaker’s direction here is restrained; his static camera observes his characters from a distance, almost always in long shot, without ever investigating their internal state of mind – except for a sole dream sequence. This allows for an intimate relationship with his subjects to build over the course of the film. The production designer for Amour, Jean-Vincent Puzos, worked with Michael Haneke for the first time with this film. Sheri Linden of the Los Angeles Times spoke with the filmmaker and discovered that the apartment was modeled after his parent’s home. "The layout of the apartment was identical to the apartment of my parents in Vienna.” The filmmaker claims that having “a space” in mind was helpful while writing the film. The diagram we have presented showcases the entire plan of the apartment. These include Georges and Anne’s breakfast at the start of the film, when Anne first shows

signs of her illness (0:07:25-0:14:42), Georges and Anne in their study, when Georges helps Anne move from her wheelchair onto the nearby chair (0:22:16-0:24:51), and George and Anne’s bedroom at the end of the film, when Georges suffocates Anne (1:39:281:45:44). These three instances that we focused on are all significant scenes that focus on the decline in Anne’s health – from sitting in her kitchen, to sitting in a wheelchair, and finally, being bedridden and unable to move. In the scene in the kitchen, at the start of the film, Georges and Anne are in seemingly good health. Georges notices that Anne is unresponsive; he wets a towel, leaves the water running and walks over to their bedroom. The use of space in this scene is dependent on the sound design. Georges later puts on his jacket and hears the water stop running. This prompts Georges to rush back into the kitchen.

In the scene in the bedroom, Anne is bedridden and is at the final stages of her life. The use of space in this scene once again is determined by sound. Georges is in the bathroom, shaving, when he hears Anne’s cries. It’s the sound of her voice from the other room that prompts Georges to go from one space to the other. In addition to these scenes, music plays a central role throughout the entire film. The use of sound and music in the film is diegetic; its source is visible on the screen or originates within the space of the film. In a later scene in the film, after Anne has become bedridden, we see Anne (in perfectly good health) playing the grand piano in their study. Michael Haneke films this in a long shot, then cuts onto an isolated shot of Georges sitting in a chair in the room. The sound of the piano carries over with this cut, until Georges turns in his chair and turns off a CD player, which stops the music that was coming from her piano. Michael Haneke films this scene in a realistic manner, even though it’s imagined.

The final scene between Georges and Anne is once again instigated because of sound. Georges rests in their den and hears the sink being turned off, which prompts him to go back to the kitchen. Georges discovers Anne washing the dishes (despite the fact that she is no longer alive at this point in the film). The director tells Aaron Hillis of Indiewire that the detail “occurred to me because in my parents’ apartment, the kitchen and the bedroom were quite far apart. If it had been different, I’m not sure I would’ve had that idea.” Michael Haneke films this shot in a two shot; both characters fill up the frame, emphasizing their closeness. The filmmaker, who often obsesses over the sound and production design in his

films, had complete freedom with the construction of this space. The library and music room was constructed from real oak. In The Hollywood Reporter, we learn about how specific he was with the design of the space itself. “The crew had to install and reinstall the parquet floor to make sure it creaked just right.” In lieu of shooting on actual locations, Michael Haneke recreated an entire location according to his specifications to create the space he desired for his film. The filmmaker’s wife, Susanne, who oversaw the set decoration for the film, was specific about the slightest details in each of the rooms. Sheri Linden notes that the library and music room is infused “with the sense of the octogenarian characters’ shared life and work,” and rather than cramming bookshelves with a collection of books, each book was chosen specifically, “ordered according to theme and subject matter, and also alphabetically within the themes.” The space that exists in the film, as a result, is a reflection of the characters’ class and culture. The use of space within this single location is notable; much of the events that happen throughout the film are described rather than shown. Michael Haneke shows his audience that which is essential – insignificant details about doctor’s visits, for instance, is are only described. In addition, this space exists separate from the outside world, as Georges and Anne live a somewhat disconnected life; notice how their apartment only welcomes visitors after Anne has fallen ill. In setting the majority of the film in a single location, Michael Haneke shows how a familiar, comfortable setting could also become a sort of prison or purgatory for its characters. The use of space in this film suggests that our own homes can become the setting and location for extreme pain and darkness. INT

Amour (2012). Director: Michael Haneke. Interiors is a monthly journal where we analyze and diagram the space of certain films. (Scene: 0:07...

Amour (2012). Director: Michael Haneke. Interiors is a monthly journal where we analyze and diagram the space of certain films. (Scene: 0:07...