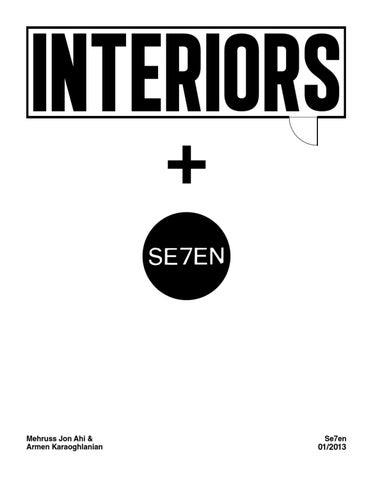 â&amp;#x20AC;&amp;#x153;The vastness of the desert around them emphasizes the fact that the handcuffed John Doe is captured; a lack of freedom despite the free space around him.â&amp;#x20AC;?

Interiors: Issue 13 (01/2013) Film: Se7en (1995) Director: David Fincher In his write-up of The Girl with the Dragon Tattoo (2011) for MUBI, Ignatiy Vishnevetsky notes that most filmmakers are “interested in answering some variation of why,” whereas David Fincher “seems more interested in questions of how and in what order.” The film, much like David Fincher’s former films, Se7en (1995) and Zodiac (2007), presents us with the process of the investigation. In Se7en, he is more interested in questions of how the killer operates rather than questions of why. The film follows Detective Lt. William Somerset (Morgan Freeman) and Detective David Mills (Brad Pitt) in their quest to find a killer who orchestrates a series of horrifying murders modeled after the Seven Deadly Sins. The detectives navigate through physical spaces for the entire film – dark hallways and alleyways, disorganized rooms and offices, crowded buildings and eateries – and as a result, much of the film takes place indoors in confined spaces. It’s interesting to note, then, that the climax of the film shifts from an indoor setting g to an outdoor setting. g

The final scene of the Se7en takes place completely and entirely in the middle of nowhere. The emptiness that surrounds the detectives, as well as John Doe (Kevin Spacey), acts as a stark contrast to the rest of the film. The open space is further contrasted with David Fincher’s shot selection, switching back and forth between car and helicopter. The vastness of the desert around them emphasizes the fact that the handcuffed John Doe is captured; a lack of freedom despite the

free space around him. The shots from the helicopter provide us with a site plan look at the surrounding space. The back and forth between car and helicopter shows David Fincher zooming in and out of scale; ground level versus aerial view. The use of visual effects in David Fincher’s films adds necessary details to the narrative of the film. In Zodiac, for instance, visual effects helped him recreate 1970s San Francisco, whereas visual effects in The Girl with the Dragon Tattoo, added detail and texture to the background shots in his snowy Sweden. In Se7en, visual effects are used so carefully and effectively, that its use never draws attention to itself. In our research for this film, we discovered the location for this scene using Google Earth. The actual location where this scene takes place is on West Avenue I and 105th Street West in Lancaster, California. In the actual location of this space, there are only a few power lines scattered throughout the road. David Fincher added many more power lines with CGI.

In doing so, he creates a much more industrial space, one that feels both claustrophobic and open. The use of effects also extends to the overall look of the image. The production had run out of time while filming and did not film the helicopter shots. New Line Cinema later provided the production with more money, but by the time they filmed the helicopter shots, the open space had gone from mostly green to a dry desert. The new shots did not match with the original shots. The footage on the ground was later color corrected and made more yellow to make the location appear more desert-like. This shows us how David Fincher achieved his vision – adding detail onto an existing space.

Ernest Hemingway once wrote, &quot;The world is a fine place and worth fighting for.&quot; I agree with the second part.

The film never states John Doe’s reasons for choosing this location for their final showdown, but David Fincher has remarked that the location and its many power lines would break up communication from the ground and to the helicopter; although this isn’t the case in the actual film, this did happen while filming the aerial footage with stand-in actors months later.

William Somerset and David Mills drive up a dirt road and stop their car just before West Avenue I. The diagram we have presented focuses on the moment in the film where David Mills shoots John Doe. The diagram is completely accurate in terms of the character’s positioning and stance at the exact moment of the shooting. The moment of impact is significant for obvious reasons; the lives of all the characters change forever at this exact moment. The characters are just off to the west of the dirt path, which we have indicated in our screenshot of Google Earth. In this scene, David Mills points a gun to a handcuffed John Doe, while William Somerset turns to his right (looking north) and notices a van heading in their direction. In our analysis of this location, we discovered that the van coming down the hill was not as nearby as the film indicates. In other words, William Somerset wouldn’t be able to see the van from that specific hill from where he is standing. David Fincher cheats this shot and films a van coming down a hill in another part of this town. The hill is a little less than two miles away from the actual location where David Mills murders John Doe. It’s our guess that David Fincher chose this location, rather than staying true to the shot, because of the depth of the hill. The composition of the shot and the image of a van descending were worth cheating for the

filmmaker. In the film, we hear William Somerset tell police that a van is coming from the north. In our analysis of this location, we discovered that this would be accurate. In the production draft of the screenplay for the film, however, we noticed that William Somerset states that the van is “coming from the east.” It’s interesting to note that this detail was changed, most likely during filming, when the crew was on location. In a later moment in this scene, after the driver of the van has dropped off a box, he runs away and heads in the same direction (north), as Morgan Freeman tells the helicopter police, that the driver is heading north. This is significant because David Fincher remains accurate with the surrounding space. The shot of the van was cheated because he created a much more interesting visual image, but he doesn’t cheat surrounding space and stays true to the details of the space and location. David Fincher goes to great lengths in order to achieve his vision, never abandoning his attention to detail. INT