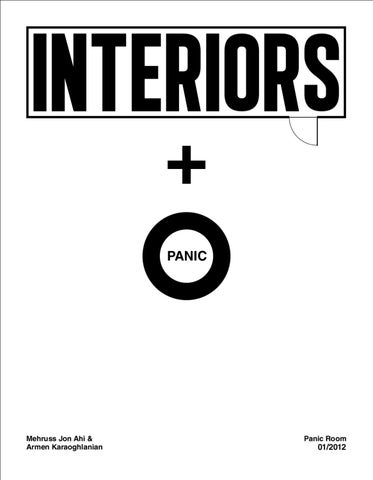 â&amp;#x20AC;&amp;#x153;Their positioning throughout the scene provides us with an understanding of how David Fincher uses space within the film, and in doing so, how he also maintains the architectural integrity of the film.â&amp;#x20AC;?

Interiors (01/2012) Film: Panic Room (2002) Director: David Fincher The use and function of space in cinema is seldom discussed or explored in length save for when space or its lack thereof announces itself. In this sense, space is never assessed until a film makes its audience aware of its relationship to its characters. The walk-through of the brownstone in the opening scene of Panic Room (2002) makes immediate references to its space. The vastness of the house and its open space serve as selling points for the realtor, who remarks that the house has three floors and an elevator, which he claims is unusual for a brownstone. Meg (Jodie Foster) flirts the idea of purchasing the house along with her daughter (Kristen Stewart), but her reservations are due to its substantial size. The mother’s reservation is due to its substantial size and deems the house inappropriate because of this, but caves in, nonetheless. In the case of Panic Room (2002), space is an integral part of the film, considering its one-location setting; however, in examining a specific scene in the film, character movements in relationship to their surrounding architectural space can be also be measured. The diagrams provided breaks down a scene in the film when Meg discovers there are three intruders in her house. The diagrams chart the movements of the five characters in the house, which includes Meg, her daughter and the three intruders. In these diagrams, we have recorded the number of times each of these characters come to a standstill, focusing on their action within the space itself. Their positioning throughout the scene provides us with an understanding of how David Fincher uses space within the film, and in doing so, how he also maintains the architectural integrity of the film. The scene opens with Meg in her panic room in the second floor of the house, as she directly looks into the camera. This breaking of the fourth wall calls for a violation

of personal space, as the character makes us aware of our voyeurism and establishes our spatial relationship which will be explored for the rest of the film. The action begins in these moments; Meg runs to her daughter’s room and makes several decisions that later has significance in the scene itself. The three intruders begin shifting themselves on the first floor; Burnham (Forest Whitaker) hesitates and ultimately remains on the first floor, Junior (Jared Leto) follows after Meg, while Raoul (Dwight Yoakam) rushes to the third floor where Meg’s daughter comfortably sleeps. In her dash across the hall, we notice that Meg has exited her master bedroom through a door that connects to the hallway, rather than her main door. This seems an odd choice because she chooses a longer route to her daughter’s bedroom and results in missing an extra second. The reason for this decision is held from the audience and made clear in later in the scene. Meg soon finds herself in her daughter’s room and soon, mother and daughter, rush down their hall together, before running into one of the intruders, Raoul. Meg and her daughter turn back and hop onto an elevator. The elevator shoots them down, without stopping for Junior on the second floor. Junior informs Burnham that the mother and daughter are headed to the first floor, however Burnham is a criminal with a heart of gold and expresses his disinterest in being involved. This results in Junior now running back downstairs to the first floor himself, stopping in front of the elevator doors. In these moments, we can observe when our characters are at a standstill; for instance, Burnham, for the most part, remains in one position throughout the entire film because of his reluctance to participate in the endangering of a woman and her child. In addition to the importance of the movement of the characters, their decision to stop and remain at a standstill is equally significant. The diagrams provided focus on these standstill moments for the five characters.

Meg’s daughter, however, reminds her mother of the panic room. The mother and daughter’s quick thinking sends them back up to the second floor; a frustrated Junior is now back on the move, while Raoul comes back down a floor as well. David Fincher’s camera in this scene also mimics the actions of its characters; when Meg and her daughter move down with the elevator, he cuts to a tilt down onto Burnham, who remains still on the first floor. Meg’s second decisive decision comes upon their exiting of the elevator. Meg refrains from taking an immediate left, which would take her down the hall, into her master bedroom and into their panic room. Meg, instead, makes an immediate right upon exiting. This results in them once again taking a longer route, this time going through a spare bedroom, a bathroom, across the master bedroom and into their panic room. These decisions in turn confuse Junior and Raoul. Junior catches a glimpse of Meg and her daughter in the bathroom and points Raoul into that direction. Raoul, however, mistakenly makes a right and finds himself in the spare bedroom, thus positioning himself outside of the main equation. Junior, then, realizes this mistake and darts for the main door, which Meg had disregarded in her initial chase. In this particular moment in the scene, Meg and her daughter are on the opposite side of the door, rushing to the panic room, and Junior’s entrance can stop them; however, as Junior tries to open the door, we realize (as he does as well) that there are stacked boxes blocking the door. Junior tries to push in the door, but this provides Meg and her daughter with an extra second, which allows them to escape safely into the panic room. In thinking of architectural space and character movements, we can see that Meg’s decisions were planned and David Fincher’s positioning and blocking of the actor’s served the story in its suspense. Meg’s initial run to her daughter’s room outside of the door that connects to her hallway suggests that she had planned to take a longer route, hoping this

situation would potentially benefit her. Meg makes a conscious decision when she exits through her second door and leaves her boxes untouched; perhaps, she knew such an opportunity might present itself, though realistically she presumed she was essentially saving time by taking the longer route to her daughter’s room. In either case, these two key decisions ultimately result in Meg wasting an extra second, but that second is later made up when she confuses both Junior and Raoul. The basis of this film is space, and David Fincher’s honoring of architectural space and character movements, provides us with an understanding of spatial relations as used in cinema. The film concludes with a reference to space, as the film did with its opening. In the closing scene of the film, Meg and her daughter can be seen sitting on a park bench, searching through ads for a new home. The daughter comes across modest sized home with three bedrooms. The mother claims, “Do we need all that space?” The use of space – its vastness, its logistics – has now affected the lives of its characters and has embedded itself into the narrative of the film. In this scene, David Fincher’s camera once again serves the film’s narrative as he makes use of the reverse tracking shot, a visual trick image, which both distances us from the mother and daughter and simultaneously keeps us in a standstill, like its characters from the film. INT