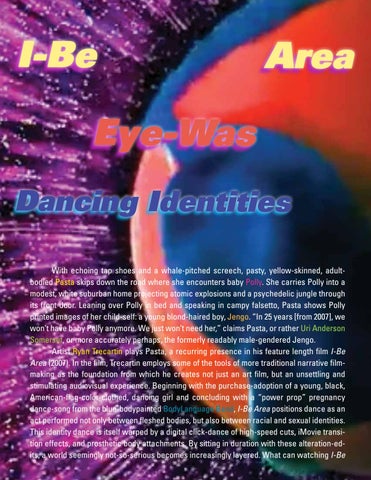 Eye-Was Dancing Identities With echoing tap shoes and a whale-pitched screech, pasty, yellow-skinned, adultbodied Pasta skips down the road where she encounters baby Polly. She carries Polly into a modest, white suburban home projecting atomic explosions and a psychedelic jungle through its front door. Leaning over Polly in bed and speaking in campy falsetto, Pasta shows Polly printed images of her child-self: a young blond-haired boy, Jengo. “In 25 years [from 2007], we won’t have baby Polly anymore. We just won’t need her,” claims Pasta, or rather Uri Anderson Somerset, or more accurately perhaps, the formerly readably male-gendered Jengo. Artist Ryan Trecartin plays Pasta, a recurring presence in his feature length film I-Be Area (2007). In the film, Trecartin employs some of the tools of more traditional narrative filmmaking as the foundation from which he creates not just an art film, but an unsettling and stimulating audiovisual experience. Beginning with the purchase-adoption of a young, black, American-flag-color-clothed, dancing girl and concluding with a “power prop” pregnancy dance-song from the blue-bodypainted BodyLanguage Band, I-Be Area positions dance as an act performed not only between fleshed bodies, but also between racial and sexual identities. This identity dance is itself warped by a digital click-dance of high-speed cuts, iMovie transition effects, and prosthetic body attachments. By sitting in duration with these alteration-edits, a world seemingly not-so-serious becomes increasingly layered. What can watching I-Be

A Wesleyan University student publication dedicated to the analysis of moving picture media. 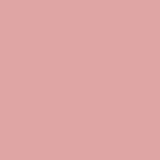