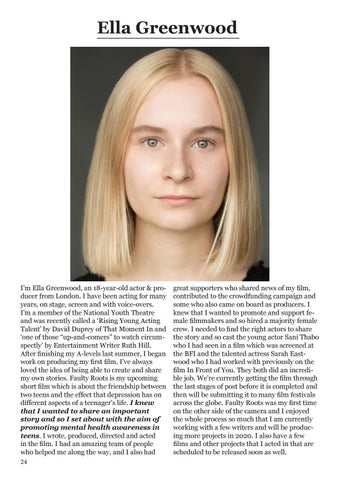 I’m Ella Greenwood, an 18-year-old actor &amp; producer from London. I have been acting for many years, on stage, screen and with voice-overs. I’m a member of the National Youth Theatre and was recently called a ‘Rising Young Acting Talent’ by David Duprey of That Moment In and ‘one of those “up-and-comers” to watch circumspectly’ by Entertainment Writer Ruth Hill. After finishing my A-levels last summer, I began work on producing my first film. I’ve always loved the idea of being able to create and share my own stories. Faulty Roots is my upcoming short film which is about the friendship between two teens and the effect that depression has on different aspects of a teenager’s life. I knew that I wanted to share an important story and so I set about with the aim of promoting mental health awareness in teens. I wrote, produced, directed and acted in the film. I had an amazing team of people who helped me along the way, and I also had 24

great supporters who shared news of my film, contributed to the crowdfunding campaign and some who also came on board as producers. I knew that I wanted to promote and support female filmmakers and so hired a majority female crew. I needed to find the right actors to share the story and so cast the young actor Sani Thabo who I had seen in a film which was screened at the BFI and the talented actress Sarah Eastwood who I had worked with previously on the film In Front of You. They both did an incredible job. We’re currently getting the film through the last stages of post before it is completed and then will be submitting it to many film festivals across the globe. Faulty Roots was my first time on the other side of the camera and I enjoyed the whole process so much that I am currently working with a few writers and will be producing more projects in 2020. I also have a few films and other projects that I acted in that are scheduled to be released soon as well.

Integrity Magazine, based on having strong and moral principles. January to February Issue. 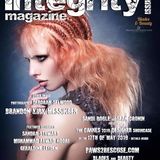