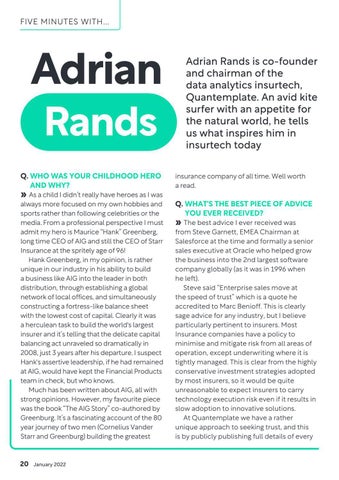 Adrian Rands is co-founder and chairman of the data analytics insurtech, Quantemplate. An avid kite surfer with an appetite for the natural world, he tells us what inspires him in insurtech today

Q. WHO WAS YOUR CHILDHOOD HERO AND WHY?

insurance company of all time. Well worth a read.

always more focused on my own hobbies and sports rather than following celebrities or the media. From a professional perspective I must admit my hero is Maurice “Hank” Greenberg, long time CEO of AIG and still the CEO of Starr Insurance at the spritely age of 96! Hank Greenberg, in my opinion, is rather unique in our industry in his ability to build a business like AIG into the leader in both distribution, through establishing a global network of local offices, and simultaneously constructing a fortress-like balance sheet with the lowest cost of capital. Clearly it was a herculean task to build the world&#39;s largest insurer and it’s telling that the delicate capital balancing act unraveled so dramatically in 2008, just 3 years after his departure. I suspect Hank&#39;s assertive leadership, if he had remained at AIG, would have kept the Financial Products team in check, but who knows. Much has been written about AIG, all with strong opinions. However, my favourite piece was the book “The AIG Story” co-authored by Greenburg. It’s a fascinating account of the 80 year journey of two men (Cornelius Vander Starr and Greenburg) building the greatest

Q. W HAT&#39;S THE BEST PIECE OF ADVICE YOU EVER RECEIVED?

» The best advice I ever received was

from Steve Garnett, EMEA Chairman at Salesforce at the time and formally a senior sales executive at Oracle who helped grow the business into the 2nd largest software company globally (as it was in 1996 when he left). Steve said “Enterprise sales move at the speed of trust” which is a quote he accredited to Marc Benioff. This is clearly sage advice for any industry, but I believe particularly pertinent to insurers. Most Insurance companies have a policy to minimise and mitigate risk from all areas of operation, except underwriting where it is tightly managed. This is clear from the highly conservative investment strategies adopted by most insurers, so it would be quite unreasonable to expect insurers to carry technology execution risk even if it results in slow adoption to innovative solutions. At Quantemplate we have a rather unique approach to seeking trust, and this is by publicly publishing full details of every